The Garden of Stones by Mark T. Barnes 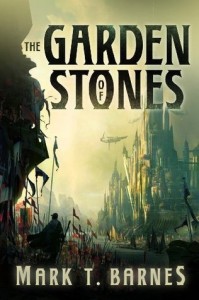 Thus far, reviews for Mark T. Barnes’s debut, The Garden of Stones have been very divided. Some praise its unique and exotic flair, others grew bored quickly. After a recent slew of favorable reviews, I decided to give it a shot since it was already on my Kindle and cost me nothing but time (although time is becoming increasingly more valuable for me). Upon finishing, I had mixed feelings about the novel as a whole, but there was enough in it to make me want to continue the series.

Corajidin is the rahn, or ruler, of the Great House of Erebus. Due to some mysterious illness, Corajidin’s insides are withering away, and with them, his life. His resident witch tells the dying rahn that he has seen visions of the future – a future where Corajidin will be Asrahn, essentially an elected high king, over the other rahns and the Avan people (a species, not a race) as a whole. Not content with rolling over in the face of this disease, Corajidin’s ambition instead grows  monumentally, and he’s willing to do whatever it takes for these visions to come true. Alongside Corajidin, we see through the eyes of the warrior-mage Indris, member of the rival Great House of Nasarat, who stands in his way. Corajidin’s daughter, the incredibly indecisive Mari, also gets some facetime.

Possibly the biggest turn-off or turn-on, depending on one’s tastes, was the world of Ia itself. The first half of Barnes’s debut drowns you in new terms and people throughout, and it’s safe to say that a significant portion of the people who didn’t enjoy The Garden of Stones balked at being dropped right into such a detailed world. I’m personally a fan of worldbuilding, even in extensive amounts, but it obviously varies by case. Here, it almost seemed like Barnes approaches the reader thusly: “Hey, check out my sweet world. No seriously, look at it. LOOK AT IT!” he shouts as he smacks you in the face with pictures of it, leaving your nose a bloody wreck. I probably felt about the same I did when I first read Gardens of the Moon, the first in the Malazan series. There are so many cultures, races, people, and terms that Barnes saw fit to include a reference page on his site (and how necessary it is!). Be wary of the characters page though, as it is cumulative and displays deceased next to characters who have, of course, been killed. I believe the ones at the end of each book are safe to check out while reading, however. Some authors seem to think that making the names of characters and places impossible to pronounce is the way to create an original world. That’s simply untrue. R. Scott Bakker’s Prince of Nothing series is guilty of this (granted, I haven’t read it so I’m going on what bits I’ve read and heard) – Bakker’s work looks as though he grabbed a keyboard with umlauts and other foreign characters and began mashing it with his fists (though some of Barnes’s creations fall into the mashing category) – and in reality, it’s a poor disguise for a world that is so clearly a parallel of the Crusades.

I’m not knocking the borrowing or even the full usage of our world in fiction (as you can see, I love thinly veiled Earths). It’s a great foundation to build upon and it’s there for the taking. It’s when stories and worlds live under facades of uniqueness, like Bakker’s (again, from the outside, and also maybe slightly exaggerating), that it gets tiresome. Barnes blends various cultures that we know – there are flavors of several African regions as well as seemingly large influence from most of the East (I’m probably missing some, too), and they’re blended in a way that actually feels unique. This was partially marred by the repetition of full names of things, i.e. Great House of Nasarat where simply Nasarat would suffice, or Angothic Spirit Casque where even just Casque would work. It improved a bit as the story progressed, though.

The aesthetics of the world were very interesting. Most, if not all of the tech is powered by Ia’s magic, disentropy, also known as ahm. Machinations like Torque Spindles and Spirit Casques appear, the former able to create beings (essentially armies) in a manner of days/weeks, the latter able to trap one’s spirit, preventing the Awakening of an heir. Rahns are Awakened – they are connected to Ia – and they’re able to access the memories of their entire house line as well as being able to change the weather, see great distances, and some other stuff that makes them far more powerful than your average person. This affected my enjoyment a bit in that everyone seemed incredibly powerful, and not just rahns (in fact, I can’t remember one actually doing any of these things. Everyone was a master swordsman or a mage of some sort.

Mark Barnes’s debut, The Garden of Stones, is definitely a slow burn. I hate to use the term slog because it seems like a slap when a tap is what I really mean. Up to about the halfway point I was still focusing on all the new terms, and by the end I finally knew for the most part what most things meant. Many of the issues, especially the drowning in worldbuilding and occasionally too-purple prose, can be attributed to debut author syndrome. Garden is one of the only truly exotic novels I’ve read in some time, and without ambitious debuts, we wouldn’t be still reading many of our favorite authors. Count me in for The Obsidian Heart, as I’ve been told Mark firmly shakes off debut author syndrome.

8 thoughts on “The Garden of Stones by Mark T. Barnes”