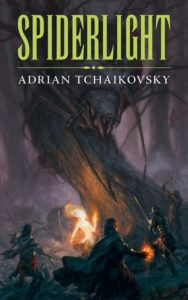 A dark lord has risen…again…and is marshaling his forces of darkness against the Church of Armes of the Light and all its followers, and it’s up to a band of adventurers to stop him from extinguishing all the light in the world. Dion: priestess and champion of Armes, Lief: the sly, quick-witted rogue, Penthos: the master magician, Harathes: the holy warrior, Cyrene: the ranger, and Nth: a spider-turned-human forced to aid the fellowship in their journey.

Wait, is this Lord of the Rings? No? What about Dungeons and Dragons? Still no? Wheel of Time? Hold on, I’ll get it eventually…

Yep, this is another fellowship-bands-together-to-fight-great-evil story. But it’s also much more. Adrian Tchaikovsky’s Spiderlight takes the strongest aspects of the author’s previous work in characterization and world-building and sets a great pace, all while posing some very meaningful questions on human nature and interaction. The tone is dark and laced with perfectly-placed humor from Lief, and it wouldn’t be Tchaikovsky if it didn’t include spiders of some sort. Picture it: giant masses of spiders, beady eyes flashing in their thousands, vying with each other just at the edge of the darkness to be the first to strike at the intruding humans. There are few authors who can depict spiders so well that arachnophobes will slam their book closed (or more expensively, their Kindles against a wall) at the mere mention of them. Spiderlight hits (and hits well) on a lot of the points that feel right about D&D and similar stories – the light and dark theme, the fellowship, the feeling of powerful magic, and the epic quest (as well as the purposely, distinctly D&D dialogue). Tchaikovsky fits an impressive amount of good stuff into the slim 300-pager that is Spiderlight, but what stands out the most is the author’s exploration of what it means to belong and how it feels to not.

Nth is a spider forced into the fellowship by the Spider Queen in order to preserve their brood from extinction, and from the outset he is reviled as an outcast and exile by his companions. Tchaikovsky puts us in the mind of Nth as he is the target of speciesism (yes, apparently that’s a word) and anthropocentrism, and it feels bad to be in the shoes of a target of such hate. Eventually Nth rails back at one of the repeated attacks on non-humans:

They had to challenge you. They dared encroach on the world of humanity. And that means death. I know that now. It always means death.

This quote is one of the most impactful that I’ve read in SFF in its truthfulness. As the seemingly most intelligent species on the planet, we’ll always deem our safety paramount to that of other species.

Without spoiling too much, Nth eventually sees that not all humans see him as a mutant, and through the deftly-drawn lens into his mind that Tchaikovsky provides, we’re able to see and feel what it’s like to go from being an outcast to being accepted.

In stark contrast with its opposite, belonging feels amazing.