The Waking Fire by Anthony Ryan 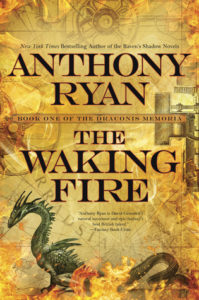 Anthony Ryan’s Raven’s Shadow series started with a bang, with many genre readers absolutely adoring Blood Song. The followups, however, seemed to be divisive, mostly stemming from the fact that Ryan opted to expand the series to have primary perspectives beyond what made Blood Song so good Vaelin al Sorna. Hope Killer. Eruhin Makhtar. I was one of the (seemingly) few who still enjoyed its sequel, Tower Lord (haven’t read Queen of Fire yet), and when I saw the cover and read the blurb for his latest, The Waking Fire, I couldn’t help but be excited. Alchemical powers! Dragons! Pirates! Steamships! Anthony Ryan! As it turns out, I found it leaps and bounds better than Blood Song, and a great start to The Draconis Memoria.

The Ironship Trading Syndicate is dominated by the distribution of “product,” or drake blood. The blood of drakes is used to fuel not only the Syndicate’s economy, but the powers of those called Blood-blessed, who can drink the various colors of distilled drake blood to gain superhuman abilities. The fact that drake blood is so heavily relied-upon has put the drakes on the road to extinction, and if that happens, the Syndicate will soon find the neighboring Corvantine Empire on their doorstep. A top-secret Syndicate group called Exceptional Initiatives has recently uncovered the possible existence of a new breed of drake – the White – whose power is said to be leagues beyond that of the Reds, Greens, Blues, and Blacks, and they’re willing to do anything to find it and exploit it.

Claydon Torcreek is an unregistered Blood-blessed, making his way in life through thieving and participating in underground fight clubs. When he finds himself on the wrong side of a prison cell, he’s offered a chance at freedom through aiding Exceptional Initiatives in their hunt for the White. Lizanne Lethridge is a Blood-blessed spy and assassin in Exceptional Initiatives, and she’s been tasked to go behind enemy lines, deep undercover as a servant of an enemy lord who supposedly has knowledge of the White’s whereabouts. Finally, Corrick Hilemore is an officer on an Ironship vessel hunting pirates, when an unexpected clash leads him and his crew far beyond pirate-infested waters.

If there’s one thing Anthony Ryan does well (there are actually several, but that’s not important right now), it’s his ability to build a richly-detailed world in a reasonable amount of pages. In all three Ryan novels I’ve read, I’ve had the same feeling – that they were the perfect non-tome length, but I still got the feeling of a complete world I could get lost in. Whether it’s Clay’s insane adventure into uncharted wilderness in search of the White, Lizanne’s subterfuge and general badassery behind enemy lines, or Hilemore’s thrilling clashes at sea, I was totally and utterly absorbed. Ryan has the viscera of battle, whether at land or at sea, down to a tee.

Something that goes hand-in-hand with the worldbuilding is the pace of the plot. I mentioned that I never felt like I needed more or less pages than what we’re given; the plot is (mostly) consistently interesting and well-paced. It didn’t matter if I was reading about Lizanne giving reports to her superior, Madame Bondersil, Clay sitting watch by the campfire, or Hilemore running his riflemen through drills – Ryan wrote it so that you can always feel the tension, the uneasiness of the characters that something terrible is just beyond that door, just beyond the light of the campfire, just over that wave.

With three main characters, it’s no small feat when there isn’t a single one of them that I was disappointed to find at the header of the next chapter. Each was compelling and felt fleshed-out, which is an attribute that extended to even the secondary characters. Braddon Torcreek, Clay’s grizzled old uncle and head of the company that is leading the expedition to find the White; Jermayah, the Leonardo da Vinci-like inventor; Mr. Steelfine, the Master-At-Arms of Hilemore’s Viable Opportunity, to name a few of the ensemble of interesting secondary characters I was more than keen on following.

All in all, with superb narrative flow, a compelling plot, and excellent characterization, The Waking Fire is an inventive, riveting beginning to a series that’s sure to turn heads, and it sits firmly on my shelf of favorites. I eagerly await The Legion of Flame in July 2017.

2 thoughts on “The Waking Fire by Anthony Ryan”