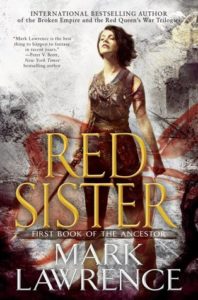 It is important, when taking a novice into the Convent of Sweet Mercy, to do a full background check first. Or at least that should’ve been the case for Nona Grey, who is saved from the hangman’s noose by Abbess Glass to kick off Mark Lawrence’s latest, Red Sister, first Book of the Ancestor. At the Convent of Sweet Mercy, novices are trained through Red, Grey, Mystic, and Holy classes before becoming a nun, where they are then chosen to follow one of the orders: the warrior Martial Sisters (Red), shadow-dwelling Sisters of Discretion (Grey), magic-wielding Mystic Sisters (Mystic), and the traditional Brides of the Ancestor (Holy). What order the novices are ushered into depends on purity of blood, but not necessarily in the way one might think. Inhabitants of Abeth are of four bloodlines: Gerant are significantly larger than normal; Hunska are lightning-fast and dark of hair and eye; Marjal can channel lesser magics; Quantal are able to walk the Path and channel greater magics. It’s a game of fours at Sweet Mercy, and Nona Grey will find that you can’t quite escape your past, even in a place as secluded as the Convent in which she was stolen away to. Trouble comes knocking shortly after her arrival, and naturally Nona is swept well over her head into a tale of revenge, political machinations, and prophecy.

Mark Lawrence has made a name for himself in recent years as one of the best in fantasy with The Broken Empire and The Red Queen’s War. In the former, readers were drawn in and led to root, in a way, for Jorg – but not because he was a likable character, but because of the endgame of the story he was moving through. In the latter, Jalan is the epitome of an unwilling hero who you can’t help but eventually love because despite his cowardice, despite his selfishness, he is devoted to his brother-in-arms Snorri and his quest. With Nona, Lawrence takes us to a school-like setting (Harry Potter, The Magicians, etc) where we’re introduced to a fierce, passionate girl with a haunted past that’s the easiest from-the-get-go to root for of Lawrence’s protagonists. The cast of characters is memorable all the way down, and several of them have arcs that take unexpected turns, and even the unexpected turns take unexpected turns.

I’ve said it before and I’ll say it again: Lawrence’s books are the perfect length in an age where any and all sci-fi and fantasy books can and must be tomes. With each sitting comfortably between 400-500 pages, there are no spare words, but each sentence is crafted carefully and naturally. There’s a sweet spot in an author’s prose for me between two commonly-used words to describe an author’s writing: workmanlike and purple. Many describe Brandon Sanderson’s prose as workmanlike in that it isn’t flowery or purple, but is crafted well enough to keep the story moving. Jacqueline Carey is the best example I can use of prose that borders on too flowery for my tastes, though I have loved everything I’ve read by her – the plot’s speed takes a hit with purple prose. Guy Gavriel Kay is synonymous with beautiful prose, but even his can occasionally be just a word or two too descriptive. Lawrence is somewhere in between, sitting superbly at the point where the words seem to force the plot enthusiastically forward with great pacing.

“All the world and more has rushed eternity’s length to reach this beat of your heart, screaming down the years. And if you let it, the universe, without drawing breath, will press itself through this fractured second and race to the next, on into a new eternity. Everything that is, the echoes of everything that ever was, the roots of all that will ever be, must pass through this moment that you own. Your only task is to give it pause—to make it notice.”

With the audiobook, Heather O’Neill is a narrator I’d not heard before, but she steadily grew on me throughout and by the end I loved her actor-narrator (think Jim Dale, each character getting a distinct voice) narration. What more is there to say? If you’ve already read Lawrence, you have an idea of what you’re getting into, only it’s different and it’s better. If not, there’s no reason you can’t start with Red Sister, though I wholeheartedly recommend his other works as well.