The Wolf’s Call by Anthony Ryan 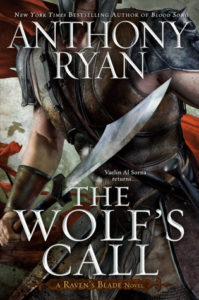 With Blood Song, Anthony Ryan introduced readers to Vaelin Al Sorna and the brothers of the Sixth Order – and readers fell in love. When Ryan opted to expand the world beyond the Order, the the story he intended to tell required the expansion of point of view characters, a design choice which allowed readers to know what was going on other parts of the world while Vaelin wasn’t present in a natural way. In the sequels to Blood Song, The Tower Lord and Queen of Fire, Vaelin went from the one and only point of view character to but one of many, though in my eyes he was still the clear main character. Fans of Raven’s Shadow series waver one way or the other, as fandoms do, as to whether or not the marked change in narrative structure bettered the story. While that’s a talk for another time, the main takeaway is that with The Wolf’s Call, Vaelin Al Sorna returns as the lone point of view character, so those that weren’t keen on Blood Song‘s followups may indeed be interested in a return to the world.

Vaelin’s name is spoken all across the world of Raven’s Shadow (and now Raven’s Blade), some in hushed whispers, others in curses, and more yet in awe of a living legend walking their land. After the conclusion of Queen of Fire, Vaelin has retired to the Northern Reaches, where he rules as a mere Tower Lord in spite of all the fame and glory that his name carries. When word comes knocking on the audience chamber’s doors, Vaelin learns of the Steel Horde – a massive, formerly disunited, group of horse tribes that have managed to be united by the Darkblade, a man who believes himself a god – and his intent is to take the world by storm & sword to bring about everlasting peace. While Vaelin is initially interested in the threat that the Horde poses to his queen’s realm as well as how he came to bear one of the same (of the many) titles that Vaelin wears, his interest changes from piqued curiosity to outright desire when he hears that his first and long lost love, Sherin, has been taken by the Horde.

A massive, united horse-lord army is invading – stop me if you’ve heard this one before. The biggest strength that Ryan possesses as a writer when it comes to Vaelin’s saga is that he’s able to take some of the basic, oft-used trappings of epic fantasy like the chosen one or the invading hordes, and dress his characters in them while they travel on a thread that goes to a place not so trod upon. As mentioned, Vaelin has returned as the central figure of the story, and every chapter is viewed through his eyes, although similar to the original trilogy with the passages of the historian Verniers, there are written accounts from another character scattered throughout: Luralyn, sister to the Darkblade. In contrast to Verniers’ account, Luralyn’s often felt overly long when all I really wanted was to return to Vaelin’s mind. We feel Vaelin’s inner struggle with being dragged into another war intimately. We see Vaelin’s bond deepen with Ellese, his sorta-niece, as her adoptive mother Reva sent her to the Northern Reaches to train with Vaelin. Anthony Ryan shares a fairly unique trait in modern fantasy with another big name, Mark Lawrence, in his ability to develop characters and worlds well without over-saturating the word count of the book.

Steven Brand returns in excellent form as Vaelin’s narrator, and funny enough I had initially bought the hardcover of The Wolf’s Call and read a whopping 15 pages before returning it for the audiobook, as after listening to The Tower Lord and Queen of Fire in audio, Brand is glued to my brain as the voice of Vaelin. Would I recommend The Wolf’s Call? Absolutely, especially for readers who read and weren’t wholly satisfied with the narrative change. For those of you who read Blood Song and didn’t read the sequels due to the narrative change – would I recommend skipping or reading a summary of the sequels? No, not really. The whole is greater than the sum of its parts rings especially true for the series. For that final group of readers, those yet to be introduced to Vaelin Al Sorna, Hope Killer, I have a fairly central stance on sequel series as jump-in points: if you read the sequel series and don’t feel lost, you should give the original series a read as a sort of history of the author’s world.

All in all, Ryan is capable of writing eminently enjoyable novels, and it’s on display in The Wolf’s Call.