Children of Earth and Sky by Guy Gavriel Kay 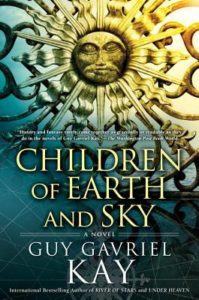 Guy Gavriel Kay is one of the most beloved authors in modern fantasy. His works are the perfect fusion of historical and fantastical. Generally considered on the lower end of the fantasy spectrum in terms of magic and and mythical beasts, they can often be described as historical with just a flair of the fantastic. He creates a blend of characters, some inspired by history and others not, and thrusts them into a richly-drawn world that is heavily influenced by Europe at various times and locales in the Middle Ages.

With Children of Earth and Sky, we’re transported to Renaissance Europe shortly after the fall of Sarantium (Constantinople). Danica Gradek is a young woman from the city of Senjan, a locale renowned for its constant fight against the invading Asharites. After proving herself to be as capable a fighter as any Senjani man, she’s swept into an adventure that provides her the opportunity to do the one thing she wants most: avenge the murder of her family by killing any and all Asharites she encounters. Pero Villani is the son of an artist and, following the death of his father, finds himself without any family left. He inherited his father’s interest and skill in art, and when the Council of Twelve of Seressa (Venice) seeks a man with no family ties to paint grand khalif’s portrait at his court in Sarantium (that’s not suspicious, is it?), Pero finds himself caught somewhere between certain death and certain fame. Leonora Valeri, cast out of her family home and into a convent for pregnancy outside of marriage, is tasked by the Council of Twelve to pose as a doctor’s wife and spy on Seressa’s rival Dubrava. Marin Djivo is the younger son of a wealthy Dubravan merchant family who, at the outset of the novel, is in Seressa preparing for a trade journey to Sarantium. Marin’s ship will be the one that carries this group of travelers eastward toward uncertain fates. Finally, Damaz is a young glory-seeking soldier in the khalif’s army and a member of the djannis (janissaries), an elite band of infantry.

Kay’s prose is unparalleled in the genre, and it serves as the vessel through which his characters eventually latch onto the hearts of readers, making each trial they encounter take on a level of intensity that page for page, many modern fantasy authors can’t match. In Children of Earth and Sky, Kay brings a very conversational prose to the table, and it often feels like it’s got its roots in oral tradition, with little asides in parentheses after sentences. Each character’s tale is told in your typical past tense save one: Marin. Marin’s is told in present tense, which I found to be somewhat odd, and I’m very curious as to why Kay elected Marin’s point of view to be different than the rest.

I almost started with “Kay’s strongest suit beyond his prose is his characters…” until I realized it would be incorrect. I can’t think of any overarching piece of the two of his novels I’ve read (Children and Under Heaven), be it characterization, plot, prose, or the world itself, that I would consider sub-par. Each of the characters in Children of Earth and Sky are consistently interesting, and they evolve as you’d think they would following their various happenings on their journeys. The world feels at the same time both fresh and historical. I found the plot to be slow-to-start until around the halfway point, and as is standard in genre readers’ favorite series, progresses quickly to the conclusion in increasing bouts of intensity. Whether the action was action in its most literal sense in sword fights and chases, or a glimpse into the khalif’s palace where an artist paints a portrait, I was enthralled. I can’t recall a time where I was on the edge of my seat reading about something as mundane-seeming as an artist painting a portrait beyond Children of Earth and Sky. If that doesn’t sell you on either Kay or Children, I don’t know what will.