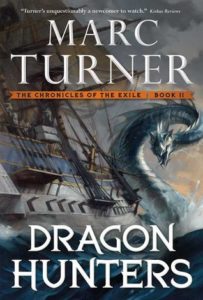 Once a year, on Dragon Day, the Storm Lords hoist open the Dragon Gate to let one of the majestic, scaled beasts slip through into the Sabian Sea to be hunted by the water-mage Storm Lords. Emira Imerle Polivar, the current elected ruler of the Storm Lords, is nearing the end of her reign and naturally has no inclination to relinquish power any time soon. Dragon Day and the raising of the Dragon Gate proves to be the perfect chance to eliminate any chance for her fellow Storm Lords to succeed her. Karmel Flood is a priest of the Chameleon, whose acolytes are able to turn invisible while not moving, and she and a companion are tasked to sabotage the Dragon Gate by Karmel’s brother Caval, the high priest. Septia Kempis Parr is hot on the trail of an assassin with seemingly unconnected targets. Senar Sol is a Guardian who finds himself on the wrong side of a prison cell after stepping through a portal at the behest of the emperor, and he’s thrust headfirst into Imerle’s court following a mysterious summons of all the Storm Lords to the seat of the emira in Olaire. Agenta Webb is the daughter of a noble daughter of a tradelord in the Gilgamarian Ruling Council, and when her father’s ship laden with valuable gems is attacked and raided by pirates, she finds herself also drawn into the great gathering of power in Olaire while attempting to find the perpetrating pirates. Unfortunately for all involved, the Storm Lords are not the only factions involved in plays for power and the game of thrones – gods do more than simply watch from above and races thought long-lost return with a vengeance.

There are several different types of novels when it comes to their similarity to the author’s inspired work, but the two most often used are those that unapologetically use a huge chunk of (if not all) of the ideas in terms of plot and characters of the inspired work, like Terry Brooks’s The Sword of Shannara, and then there are those that utilize the themes and feel of the inspiration but take it in a different way. Marc Turner’s Chronicle of the Exile is far closer to the latter than the former when it comes to its inspiration in Steven Erikson’s Malazan. When the Heavens Fall truly had a Malazan vibe to it in the way that the world, characters, and magic were described, but it sort of did its own thing with the plot. It wasn’t anything new or groundbreaking, but it didn’t need to be.

Turner continues on his own path in Dragon Hunters in giving us two things that are sorely lacking in much of modern fantasy: significant nautical action and dragons that aren’t skybound. While the entire novel doesn’t take place at sea, I have no reservations using the term nautical fantasy to describe it. The dragons are a great blend of majestic and vicious, and the Dragon Hunt is vividly depicted. There are of course varying opinions on the best way to describe magic, but I am all in favor of the way Erikson and Turner do it. Raw, powerful, and not necessarily specific in terms of its elemental charge. Magic in their worlds is often described as powerful waves of energy, utilizing words like coruscating to emphasize just what magic is: raw power. That’s not to say that Turner doesn’t have specific types of magic – there’s a scene with death magic that is easily one of the most visceral depictions of magic I’ve encountered – but that he’s versatile in his use of it.

The characters proved to be well-drawn as well, with some falling into archetypes and others not so much. At the outset I was slightly put off that we were getting another grizzled veteran Guardian who dwells on the loss of his master (Senar felt very similar to Luker of When the Heavens Fall), although while Senar did still fill the same archetype throughout, he also became easier to empathize with and therefore more likable as he gets caught in the middle of a conflict far over his pay grade. Kempis and his fellow watchmen went full Tehol and Bugg with their witty banter throughout their investigative hunt for the assassin. There’s a definite feeling that every single character in Dragon Hunters is in over their head, including Imerle. The sense of foreboding and convergence that was pervasive throughout When the Heavens Fall returns in its sequel, and from what I’ve read and heard of the third title, Red Tide, something truly huge is coming.

It takes some time for Dragon Hunters to get going, but it’s well worth the ride. Turner has shown versatility in his first two outings, with the first being a far more serious, grimdark novel and the second much more in the vein of adventure with some very well-placed humor. Whatever Turner does next with Red Tide, I’m on board.