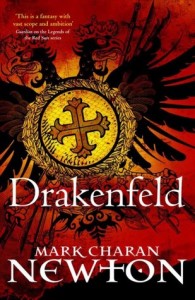 Back in May, Mark blogged about having several extra ARCs of Drakenfeld lying around. He wanted to help out new bloggers, so he sent them to various ones to help get the proverbial ball rolling. Naturally, I was very excited and grateful for the opportunity.

The cover immediately caught my attention. It’s elegant, bold, and, next to covers with landscapes on them, it’s the kind I think is significantly better than your average cover with the protagonist on it, probably wielding some sort of weapon and in all likeliness wearing a cloak.

Lucan Drakenfeld is a member of the Sun Chamber, the CSI unit of the Royal Vispasian Union. Drakenfeld is given a letter that tells him of the death of his father, and he must return to his home after ten years abroad. He and his partner, Leana, are soon tasked to investigate the murder of the sister of King Licintius of Tryum in what would prove to be the biggest case of Drakenfeld’s career, and he soon finds himself fighting off thugs and other unpleasant characters as the conspiracy unravels.

Newton’s world is inspired by ancient Rome, with baths, cohorts, and one especially brutal horse-race that seems to be a combination of a gladiatorial match and a chariot race. While the world is distinctly Romanesque, it has its own distinct feel, prodded along by the presence of magic and the distinct fear that the average citizen has of it. That isn’t to say that there’s an archetypal guild of mages, far from it. It’s a society where magic is dark and practiced by the daring or insane, and it often involves spirits and ghosts of some sort. The magic is definitely a background detail, hinted at more than being shown, but it helps create this unexplored subgenre of crime fantasy.

Lucan and Leana are fun to follow, very much a Sherlock and Watson tandem, that is, if Watson could take down a group of thugs before you had time to blink. She is badass. The book is told in the first person, through Drakenfeld’s eyes. This means the story has no chance to be bogged down by jumpy perspectives. First-person perspectives are often hard to write, but when an author is successful with it I think it’s a much more effective and immersive way of telling a story that has a small cast.

I don’t read mystery or crime novels often, but when I do read one or even watch a detective TV show, such as BBC’s outstanding Sherlock, I find it to be fun to try to solve the crime before the detective does, through subtle clues or simply guesswork. There were quite a few twists in  Drakenfeld, making it pretty hard to guess what was going to happen, though there’s a point where Lucan makes an observation to himself that essentially solves the crime for the reader without directly saying it.

Not every story has to have its own completely unique and original world. Sometimes taking inspiration from a past era and adding to it works out better than creating one, and Mark proves that he can do both after Drakenfeld and his debut series, Legends of the Red Sun. Highly recommended for the under-explored genre that is crime fantasy.

One thought on “Drakenfeld by Mark Charan Newton”

“Heroes are people who face down their fears. It is that simple. A child afraid of the dark who one day blows out the candle; a women terrified of the pain of childbirth who says, ‘It is time to become a mother’. Heroism does not always live on the battlefield.”