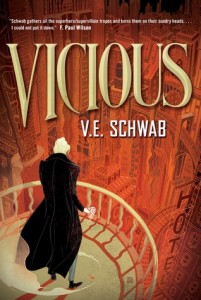 Vicious is Victoria Schwab’s first adult novel. Over the past month or so I’ve had times where I went several days between books. I’ve even temporarily shelved a few of my most anticipated books this year – Scott Lynch’s Republic of Thieves and Ann Leckie’s Ancillary Justice to name two.  The former, though reviews have been somewhat polarized, was a blast for the 200 or so pages that I read, but I was somehow still bored. The latter had really cool ideas – gender ambiguity for one – but I just couldn’t get past the blandness of the prose. In the past I’ve been one to finish anything I start. So why the hell have I struggled to pick a book and then stick with it to the end for the past few weeks? Have I been reading too much of the genre too fast? Was there not enough variety? The smallest things seemed to turn me off of books. I still haven’t figured it out. Once in a while, during these little slumps, I’ll stumble across something that seems like it’s exactly what I need. A week and a half ago it was Lev Grossman’s The Magicians, and this time it was Vicious.

Victor Vale and Eli Cardale are pre-med students, seniors in college. Everything you’d expect comes in that scenario – they’re brilliant, arrogant, and ambitious. It’s thesis time for Victor and Eli, and Eli chooses to explore the possibility of EOs, or ExtraOrdinaries, existing. Victor thinks Eli’s pulling some kind of prank, but when a possibility presents itself that makes the impossible seem possible, they decide to experiment.

Skip ten years ahead. Victor has broken out of prison with one thing on his mind: revenge. The two once-friends, now enemies, are both EOs. Eli is on a mission to liquidate all other EOs within his reach.

I don’t read superheroes novels often. In fact, the only one in recent time that I enjoyed was Ex-Heroes by Peter Clines. Vicious is not your standard superhero story. Schwab takes the idea of a hero and questions everything about it. What makes a hero? One of many stand-out quotes in Vicious explores this question:

“If Eli really was a hero, and Victor meant to stop him, did that make him a villain?”

Neither Victor nor Eli pare particularly heroic. In fact, both of them are very flawed and, in terms of shades of grey, are probably both closer to the abyss-black end than the angelic-white end. Eli’s drive to eradicate all other EOs is powered partially by God and partially by his Dexter Morgan-like system. If you fit the code, you’re a target – if you show any signs of being an EO, Eli is coming for you.

Vicious begins following Victor after he has broken out of prison, but the tale jumps between past and present throughout. Normally I really hate it when stories do this. More often than not you get the feeling you want to be following the present and the present only. But Schwab does an absolutely masterful job with clean transitions that work. Both storylines are incredibly compelling, and there’s a buildup to where they intersect to create a fantastically satisfying ending.

What sold me on the book a chapter or two in was the sort of bleak, grim , engrossing urban setting, similar to the aforementioned The Magicians, but with a special flare in the prose that keeps the pace at its highest. Vicious is designed with what I call OMCS, or One More Chapter Syndrome. The chapters are short, sometimes only a page or two. Often I found myself succumbing to OMCS so often that, before I knew it, the book was over. I don’t think huge chapters are particularly good when designing the layout of a book. They prevent OMCS, they slow the pace. Chapters can continue immediately after the final word of the previous chapter, it’s not like the story’s arm being lopped of by splitting one big chapter into two smaller ones. I think smaller chapters can only do well for the story’s pace.

If Vicious is not on your radar, it should be. If it is and you’re waffling between whether to read it or not, read it. It’s not a terribly long book at just over 300 pages, and it’s standalone in a genre dominated by series. The latter was a huge selling point for me. I am ankle-deep in too many series without the time to continue them.

Your other favorite stores…

2 thoughts on “Vicious by V.E. Schwab”