See part I of Teresa Frohock’s Religion in Fantasy here.

But one thing is clear to me: a plausible imaginary world needs religions as much as our reality seems to. Religious belief appears to be part of humankind’s make-up and even in the high-tech super-scientific 2010s, religious belief is holding ground. This is the post-9/11 world after all, where religious beliefs come armed with drones and suicide bombs.

I remember reading in a Terry Pratchett Discworld book (sorry, can’t find which one so this isn’t a direct quote, just a paraphrasing): that it was tough to be an atheist in the Discworld, because the Gods would show up and throw stones at your windows.

Many fantasy stories have gods and demigods as characters, of course, fully active and interceding. Prayers work if you ask nicely or have the right Latin phrase, and you can usually sell your soul to one demon or another and get something pretty snazzy in return (just make sure you read the fine print!). Their existence is not in question (either to the reader or the denizens of the book), so the question becomes one of finding the deity for you: one your personal conscience can cohabit with.

At that point, it’s not really religion, though, if we take religion to be a belief in the unproven. Believing in the known and the unknown are obviously two different things. Even the most fervent believer is still only a believer, until they actually get real and tangible proof. So our fantasy hero who meets Zeus is no longer a believer; they know. The nature of their faith is no longer ‘I believe in that supernatural being’; it has moved to ‘I believe that this supernatural being is worthy of my allegiance’. Doubt in the god’s existence is removed and any doubt is transferred to questions like, ‘Is this being who I think they are?’, ‘Will they do what they say?’, and ‘Will they look after me?’. At that point it’s not religion anymore, it’s patronage.

It reminds me of my D&D days, when our group decided to freshen things up for Clerics: we separated the spell-lists into different categories (Fire, Knowledge, Death, Healing, &c.), and made it so a cleric character had to be an initiate of a God of that category for the cleric to gain access to that sphere of magic (it was a polytheistic game world; you could acknowledge more than one deity, provided they were all broadly of the same pantheon). The natural consequence was, of course, that the Player-Characters all chose their Cleric’s religion based not on theology, but on the spell-list it came with: ‘I’m a cleric, and I’m looking for a God who can give me Lightning Bolts and Cure Light Wounds spells. Alignment irrelevant.’ That works for a game, but not for a fantasy world that a reader might be expected to believe in (or rather, suspend disbelief in).

Doubt and mystery are required for the religious elements of the story to be about belief, not patronage. That mystery was important in creating The Moontide Quartet. Religion plays a major part in the motivations of many of the individuals in the story, but none of them, despite being in a world where magic works, can genuinely claim to know beyond all doubt that their God (if they have one) is real. Though the Rondian magi claim their magic (the ‘gnosis’) is a gift from their god Kore, they know full well that the gnosis resulted from the chemistry experiments of their messiah’s best friend. They might argue that Kore guided the hand of the chemist, but they can’t prove it (it’s a variant on Creationism, I guess). They also know that some magi have embraced rival faiths and can still use their gnosis. So the doubt factor remains: are any, all or none of the religions real? In Moontide not even a mage in touch with supernatural energies can adequately answer the question. It remains a matter of faith. 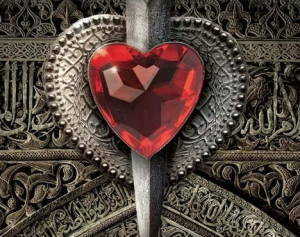 For me, this is a vital part of the story. Moontide is about the clash of cultures and giving one side the ‘Truth’ would undermine the story. The alternative, to give all sides their own One True Deity, would mean it was no longer religion, as discussed above; it would become a game of ‘Whose Supernatural Buddy is Biggest?’. So in Moontide the magical gnosis is not tied explicitly to religion but is instead a proxy technology.

Another aspect of religion is obviously morality: Deities usually come with a bunch of required behaviours and beliefs, rules of what’s good and bad and a way to live that you should adhere to and proselytise. That’s always good material for a writer, but it doesn’t require a provable God to work. A verifiable deity removes a vital layer of moral ambiguity that I prefer to keep: the question of whether a faith is based on something real. Obviously it can still leave open such questions as whether the ends can justify means, but you do lose a nice layer of angst if the existence of one or more of the gods is a given.

I think what I am trying to say is that for a writer, religion provides a rich and fertile source of themes, plot, character and world-building, and you can give it as high or low a profile in your creation as you wish. It’s your story and in that sense you are the God of your tale. You need to know what story it is you’re trying to tell, and then consider religion, like any other part of the story, and see how it too can be made to serve your story. Of course it comes with so many loaded nuances that you’ve got to consider how you tread – with ballet shoes or hobnail boots – and who you’ll tread on, so you need to do it with the appropriate level of respect (or not, if offending is your aim), but you’re the writer, so after taking all that into consideration, it’s up to you what position you give it in your tale. However, you need also to consider that though you might be God of your own imaginary world, you don’t live in that world: you live in this one, and other people have some pretty strongly entrenched positions. So if you’re going to take shots, make sure your own foxhole is secure.

. David is a New Zealander, who has worked primarily in financial services. He has a degree in History and Classical Studies. He has lived from 2007 to 2010 in New Delhi, India, but usually resides in Wellington, New Zealand. Apart from writing, he is interested in folklore, history, and has a passion for football.

2 thoughts on “Religion in Fantasy, Part II by David Hair”