Off Armageddon Reef by David Weber 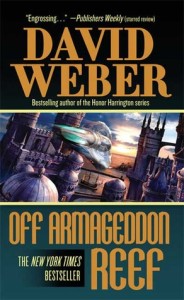 Picture this: an incredibly powerful race of aliens known as the Gdaba halted the human exploration in space and all but wiped humanity out. The remainder of the human fleet splits up – one half cloaks and stops moving, the other continues flying to draw the Gdaba away. The half of the fleet that cloaked and escaped colonized an Earth-like planet called Safehold.

Here’s the catch – the Gdaba can detect any technology of the industrial level or higher. Humanity is forced to revert to a medieval society, where Safeholdians know nothing of their space-faring past and all believe in one religion run by a very strict church. Nimue Alban’s mind awakes in the body of an android and she is given the task of helping Safehold break away from its medieval prison, despite the teachings of the oppressive church, and eventually take on the Gdaba. Since Safehold is a medieval society, Nimue’s android body is made male, and she takes on the pseudonym Merlin Athrawes. Merlin ventures to the Kingdom of Charis, an island much like Old Earth’s England, to kickstart this scientific revolution.

I’ve never read Weber’s Honor Harrington series, but I’ve heard nothing but praise for the man’s talent. The premise for Safehold seemed awesome, and with Weber’s credentials I couldn’t imagine being disappointed.

I noticed a few things right off the bat that I found questionable, the first being the unconventional names. I’m all for having fantasy-like names such as Tisamon or Bayaz as opposed to modern names like Jim or Tom. Weber decided utilize the fact that humanity had to restart in picking names, so we’re left with ones like Haarahld instead of Harold and Bynzhamin rather than Benjamin. The idea makes sense and it’s kind of cool when you think of how names evolved, but on paper and with a cast as large as Safehold‘s, it’s a bit of a struggle to remember them (though this is a nonfactor with the audiobook). They’re definitely something you get used to the more you read, and you have plenty of time to get used to them with 800 pages in the paperback, which leads me to my next point.

The Honor Harrington books were rather average in length, floating between 350 and 450 pages for the most part. Safehold books are more or less all upwards of 700 with some even pushing close to 1,000 pages. In most reviews of the series you’ll find that people comment on Weber’s infodumps. While trudging through Off Armageddon Reef‘s 800 pages, the infodumps are readily apparent, and they really mess with the pacing. Occasional bits of information are nice, especially where background is needed. It seemed like Weber was almost flaunting, though flaunting is too harsh a word, his being a font of knowledge, for dozens and dozens of pages at a time. The book could have been slimmed by several hundreds of pages and been truly outstanding.

I bet an eyebrow or two were raised at the mention of Nimue taking the form of a man to make acquiring a position of influence easier, especially with Weber’s ability to write strong female characters. While Merlin is a man, Nimue’s female mind is definitely still inside the android. She doesn’t just magically lose her attraction to men, which leads to some hilariously awkward situations. Like I said, the cast of characters is huge, full of bastards like Prince Nahrmahn of Emerald and people you ‘t help but love like King Haarahld and Prince Cayleb of Charis.

Weber’s infodumps are sometimes very useful and necessary, but often extremely slow the pace of the tome that is Off Armageddon Reef. The final 150 or so pages made everything worthwhile, though, as they include some of the most outstanding depictions of naval combat I have ever read. Off Armageddon Reef, while overlong, was definitely worth the read, and while I’d like nothing more than to avoid getting caught up in a series that may very well exceed ten books of over 800 pages each, I will definitely be attempting to catch up.

Grab Off Armageddon Reef on:
Amazon (US)

and find David on his site.