The Path of Anger by Antoine Rouaud 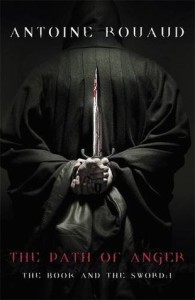 General Dun-Cadal Daermon was one of the most famous generals of the Empire. In the years since the Empire’s fall, the general has been drinking his life away, waiting for death to come and attempting to remove the betrayals of his friends from his mind. First and foremost in Dun-Cadal’s mind is the loss of his apprentice, Frog, whom he trained into knighthood. Viola, a historian from the Great College of Emeris, and she is on a quest to find the Emperor’s legendary sword, Eraëd. Rumor has it that Dun-Cadal escaped the Empire’s fall with the Eraëd in hand, and Viola wants to know where he hid it. When Dun-Cadal’s once-friends are assassinated one at a time, the two are caught up in a massive plot in which not much can be said without revealing a significant part of the plot.

Knights in The Path of Anger use magic called the animus, very similar in use to the Force. I’ve always thought that pure air, pure force, if you will, provides the best basis for a magic system. It’s simple, isn’t exactly the standard muttering of a spell to cast a fireball, and it’s fun. Where the Force appears to be able to be cast without consequences, the animus has distinct detrimental effects on the body and soul. There’s something awesome about slamming the ground and having the enemies surrounding you be launched backwards.

It seems to be a trend in recent fantasy novels for authors to use flashbacks in one way or another. Personally I think that, however interesting the flashback may be, it almost always detracts from the pacing of the present story. While most, if not all of the novels that utilize flashbacks separate them by chapter, Antoine Rouaud weaves the flashbacks into the story mid-paragraph. Whether they’re dreams or stories being told, they’re masterfully woven into the story in a way that does not detract from the pacing of the present story at all; the narrative flow is likely better than anything I’ve read this year. While most of the credit goes to Rouaud in writing the story, credit must be given to Tom Clegg, the translator. Many translated novels suffer from bumps in the translation that hinder the narrative in some way – Clegg’s translation is superb.

The Path of Anger is full of compelling characters. Dun-Cadal, Frog, and Viola are all well-sculpted and the minor characters are fleshed out in comparison to the many novels that simply sideline their non-essential characters. Dun-Cadal may have been an impressive figure years ago, before the Empire’s fall, but he’s spent the last several years drinking his life away and the alcohol’s effects are apparent – he’s no longer a great swordsman. Viola’s a young bookworm with no experience in politicking and warfare outside of what she’s read in her books.

There was one issue that seems to have nagged at everyone who’s read the book – the world-building. There isn’t any. The Path of Anger is definitely a character and plot-driven story, but may cities and events are simply named and dropped. I don’t know if a map is included in the press release of the novel, but I’m of the feeling that maps are essential in most science fiction and fantasy novels that take place or at least mention several different locations. The world isn’t described and it takes a certain something out of the story to prevent it from being a full one, though in the end the lack of world-building was a fairly minor issue in comparison to the beauty of the narrative and the characters.

The Path of Anger‘s ending was somewhat jumbled, though it did end in a solid stopping point, though I am very eagerly awaiting the sequel. Despite the distinct lack of world-building, Antoine Rouaud’s The Path of Anger is absolutely worth the read, if only for the superb narrative. Rouaud, with the help of his translator Clegg, has a way with words that simply works.

4 thoughts on “The Path of Anger by Antoine Rouaud”