Having been caught up with work and schoolwork, I haven’t had as much time to write in-depth reviews, so here are mini-revies of two books that I’ve read recently – Dream London and The Violent Century.

Tony Ballantyne’s Dream London jumped out in Solaris’s catalog instantly with its cover. The blurb was also interesting – a London that constantly changes, buildings grow of their own volition every day, very weird things happen on a daily basis. People with tongues that have eyes, potty-mouthed little girls, and an orange frog-man. Captain Jim Wedderburn is caught up on a mission to find out why London has changed. The book had some good characters, especially the frog-man, had a lot of great humor, but the plot was somewhat damaged by its eccentricity and in the end it left me feeling that it was alright, but not great. 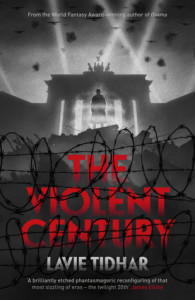 The Violent Century was a book I was very excited to read. It had an awesome premise and came highly recommended. Fogg and Oblivion are superheroes – Fogg creates fog and can create things from that fog, Oblivion makes things cease to exist. A World War II-Cold-War era setting with superheroes – what could go wrong? The narrative did it in for me. Tidhar writes in a strange way where quotes don’t exist. If someone says something, it’s like Tidhar describes him or her saying it rather than shows it via quote. It’s choppy (purposely) in that situations are described in rapid-fire – “Fogg walked in the room. Saw a chair. Sat in it.” (not an actual quote) – and in the end, I think that a normal narrative would have made The Violent Century an outstanding book. It’s different, a breath of fresh air for some, but it didn’t work for me.