The Plantagenets by Dan Jones

It was as if Christ and his saints were asleep. 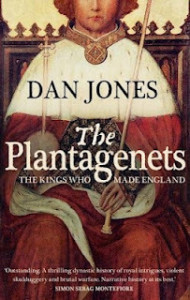 Thus wrote one of the many authors in The Anglo-Saxon Chronicle when describing the dark period in English history known as The Anarchy. The Plantagenets by Dan Jones was actually the first piece of non-fiction that I’ve read for pleasure in quite some time – an issue that will be remedied after finding Jones and several similar authors.

The Plantagenet dynasty began in the middle ages with Geoffrey of Anjou – the Handsome – taking on the name Plantagenet based on his wearing of a blossom of yellow in his hat, of the shrub planta genista in French. Geoffrey’s marriage to Matilda began the rise of one of the most fascinating dynasties in history.  The son of Geoffrey and Matilda, Henry, would go on to become King Henry II and would see England’s territory branch through almost half of France through his marriage to Eleanor of Aquitaine – an area that would be modernly known as the Angevin Empire.

The Plantagenet kings and queens who ruled England for over three centuries varied greatly, from the magnificence of Henry II and Edward III, and the Black Prince to the easily-manipulated Edward II and the signing of the Magna Carta by John Lackland; from Eleanor of Aquitaine and Empress Matilda to the deposition of the last of the primary branch of the Plantagenet dynasty, Richard II.

There is no shortage of personalities in The Plantagenets. Jones thoroughly describes the personalities of everyone – their vices and virtues, and the ever-present bouts of Plantagenet fury that every member of the dynasty had inherited in one way or another. The children of Henry II and Eleanor of Aquitaine were known as The Devil’s Brood due to the Plantagenet reputation of ferocity in various ways.

Jones clearly outlines the aspects of each king – what made some good, what made others bad – whether these reputations came about through warmaking or lawmaking. I was very happy to see Jones dispel some common myths that you’ll need to read to find out as well as his praise of Edward III, one of my favorite historical characters. He captured perfectly the ambitious king’s ascension and attempted capture of the French throne for the Plantagenets – the Hundred Years’ War is described in striking detail.

Dan Jones’s The Plantagenets is a thoroughly informative and absorbing narrative history that focuses on the administrative and military aspects of the Plantagenets rather than the economic side of things. There are those who scoff at narrative history for one reason or another, as if it’s significantly less academic than the boring, monotonous prose that many historians often use in writing histories. I laugh at their narrow-mindedness. If you enjoy reading about medieval history, do yourself a favor and read Dan Jones. I’ll certainly be grabbing the second half of this narrative, The Wars of the Roses, when it’s released in October.

5 thoughts on “The Plantagenets by Dan Jones”