The Magician King by Lev Grossman 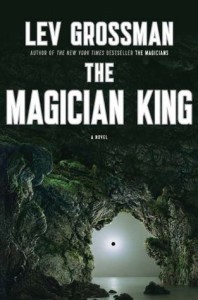 Lev Grossman’s The Magicians is one of the most divisive novels in the genre. Most readers either love it or hate it, with scant few somewhere in between. I found that I really enjoyed it, despite Quentin being a whiny, miserable, and wholly unlikable piece of shit. It takes a truly talented author to write such a compelling story about a character with zero redeeming qualities. And I really mean zero. None. Zip. Nadda. Of course, I’ve always been a sucker for plots that include some kind of training school, be it magic at Hogwarts or swordplay and discipline at the Temple of the Sixth Order. Grossman seamlessly weaved his own unique story with various sorts of pokes, jabs, and borrowed from Harry Potter and Narnia and out the other end came this compelling, albeit very bleak tale of Quentin Coldwater and his dream for shit to do.

Well, Quentin’s back, and after becoming king of the recently-discovered-to-be-real Fillory, he’s bored again. In Quentin’s staple never-satisfied way, The Magician King furthers the tale of Quentin’s quest for shit to do. Word has come to High King Eliot’s desk that an island on the far reaches of Fillory hasn’t been paying its taxes. Quentin leaps at the opportunity to do something, even something as droll as collecting what would amount to a meager amount of tax revenue. Only this time, he’s not alone, as his friend Julia is coming along.

Julia…Julia Julia. The Magician King has alternating chapters: the present storyline following Quentin and Julia on their quest, and the past that tells of Julia’s rise to the status of magician. While Quentin and crew learned their magic the normal, legal way at Brakebills, Julia had to take what she could get, learning through a series of rogue underground magic schools.

In The Magician King, Quentin is an entirely different person. While he still has the aforementioned never-satisfied attitude (who likes being bored, though?), he has clearly learned and grown up remarkably in his time since Brakebills. I daresay I actually loved him, and I’m sure that was Grossman’s purpose all along: to string the reader along with this unlikable character in order to really appreciate how much he grows and develops. Unfortunately, Julia sort of took on a minor portion of Quentin’s the-world-is-against-me attitude, although she has the history to back it up and she clearly grows throughout the flashback chapters. The most stark difference between the two is that Julia actively seeks to solve her problems, while Quentin had a bad habit of just whining.

Shortly after reaching the tax-resisting island, Quentin and Julia find themselves beginning another quest of far more consequence than a minor tax dispute.  Where The Magicians was almost universally accepted as an overwhelmingly bleak, depressing tale, The Magician King had a much more wholesome feel to it. It had variety, moments both light and dark, and Grossman has without a doubt found his element in his prose. He’s got the perfect mix of everything, from cultural references to mood to plot complexity, and the story simply flows.

While The Magicians was a good steak from your average steakhouse, The Magician King was Kobe beef in steak form, cooked as perfectly as a middle novel can be, and I expect The Magician’s Land to be the epitome of the glory that is steak, if you’ll forgive the metaphor.