When the Heavens Fall by Marc Turner 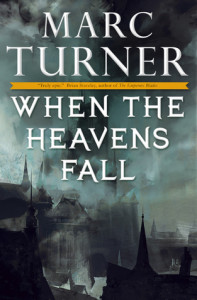 The Book of Lost Souls, an ancient relic guarded closely by a circle of mages for centuries, has been stolen by the rogue mage Mayot Mencada through the subtle directive of the goddess Spider. The Book gives its wielder immense necromantic power, and Mayot’s ambition knows no bounds as he openly challenges the god Shroud’s rule over the underworld by raising the ancient dead and lashing out at any settlement near the Forest of Sighs, the cursed forest he has made his base of operations.

The Book emits massively powerful rays of death magic, attracting all manner of other beings. Luker, a Guardian of Erin Elal and a man forced to take on the quest by the very people who betrayed him; Ebon, a prince of Galitia deeply haunted by spirits following a foolhardy expedition into the Forest of Sighs; Romany, a high priestess of the Spider commanded to play the game by her goddess; Parolla, a powerful necromancer with an incredibly mysterious past with an unstoppable drive to confront Shroud for deeds past. Of the four, Parolla easily took the cake for the most interesting and the one whose chapters I was always chomping at the bit for. Ebon followed closely behind Parolla in interest level, as he consistently struggles on the brink of insanity in both his own eyes and those around him. Luker is the stereotypical grizzled war veteran, and it felt like Romany got the least face time, though the things that she did were of import. Each character was developed deftly, but Parolla and Ebon overshadowed Luker and Romany in my interest level.

Alongside these protagonists, the disciples of Shroud and the followers of the Hunt are at the fore, the former at the bidding of their lord and the latter in pursuit of one who has angered their god. Shroud’s disciples each make spectacular entrances. I felt the way I did while reading parts of Malazan, when Anomander Rake or any of the awesomely powerful characters did something. They simply leave you thinking holy shit, that was awesome.

Comparisons are a curious thing. There’s no surprise that When the Heavens Fall has been compared to Erikson’s Malazan, since Turner cites Erikson as a major influence. Whenever you find people looking for recommendations, you’ll see the same books repeated over and over so many times that it’s hard not to imagine the recommender giving a deep sigh, pulling a scroll from their pocket, and rattling off the go-to genre names. More often yet, these insta-recommendations often don’t have anything more than the basic fantasy tenets in common with the book in question. Turner’s debut is one of the very few books that I can safely and wholly recommend to fans of Erikson. In fact, it’s common in so many ways that it’s probably easier to point out its differences (the only glaring one being that there are fewer main characters in Turner’s). The most prominent similarities are probably the magic and the richness, or even over-richness of the world. I say over-richness because while reading both Malazan and When the Heavens Fall, there are a ton of names of people, races both ancient and modern, events, and objects that it’s staggeringly difficult to keep track of at times. It’s only fitting that both authors’ works have detailed maps and dramatis personae to help out the overwhelmed reader (though a list of terms would have been nice). The magic is the highlight of both series for me. Sometimes it’s very descriptive and visceral like Turner’s death magic, and other times both series simply describe it as sorcery a la “waves of sorcery stripped the flesh from his bones.” The only clear, black-and-white difference between the two is that Mayot Mencada is without a doubt the bad guy, whereas Malazan doesn’t necessarily have one so clearly defined.

While When the Heavens Fall is a bit slow to get going, Turner’s writing will have you hook, line, and sinker the way he builds up the story and the sense of foreboding as the Book of Lost Souls pulses greater and greater power from its pages. It’s a tale of convergence no doubt, and the further I read, the more I could tell shit was going down real soon, and when it all hit the fan there was no stopping. Seriously, I tried to stop three separate times toward the end so that I could do mundane things like eat or go out, and each time I closed the book and stood up, I sat right back down and kept on going, straight through to the thrilling conclusion.

One thought on “When the Heavens Fall by Marc Turner”