Mein Gott, a post! Boy, I haven’t posted in a damn long time. Somewhere over the past month and a half I seem to have lost my drive. I still love to read, just not at the voracious (not as voracious as many of you) pace that I had before. Maybe I started too hard or too fast and burned out, who knows. Anyway, I can’t not have a best of 2013 post. I had originally planned to do some sort of made up awards thing, but I don’t think I’ve read enough books in various categories for it to mean anything.

Without further ado, here are my favorite books of 2013 (that I read, not strictly those pubbed this year, but for posterity’s sake I won’t include ones that come out next year): 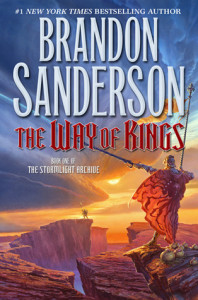 The Way of Kings, Brandon Sanderson

Roshar is a world of stone and storms. Uncanny tempests of incredible power sweep across the rocky terrain so frequently that they have shaped ecology and civilization alike. Animals hide in shells, trees pull in branches, and grass retracts into the soiless ground. Cities are built only where the topography offers shelter.

It has been centuries since the fall of the ten consecrated orders known as the Knights Radiant, but their Shardblades and Shardplate remain: mystical swords and suits of armor that transform ordinary men into near-invincible warriors. Men trade kingdoms for Shardblades. Wars were fought for them, and won by them.

One such war rages on a ruined landscape called the Shattered Plains. There, Kaladin, who traded his medical apprenticeship for a spear to protect his little brother, has been reduced to slavery. In a war that makes no sense, where ten armies fight separately against a single foe, he struggles to save his men and to fathom the leaders who consider them expendable.

Nothing more needs to be said. If you read it, you know what the fuss is about. If you know about The Way of Kings and haven’t read it, what the hell are you doing? If you haven’t even heard of it or Sanderson, I don’t think there’s much hope for you. 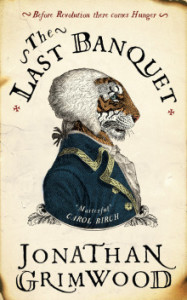 This is his story.

We meet Jean-Marie d’Aumout as a penniless orphan eating beetles by the side of a road. His fate is changed after an unlikely encounter finds him patronage and he is sent to military academy. Despite his frugal roots, and thanks to it and courage in great measure, he grows up to become a diplomat and spy.

Rising through the ranks of eighteenth-century French society, he feasts with lords, ladies and eventually kings, at the Palace of Versailles itself.

Passionate love, political intrigue and international adventure abound in Jean-Marie’s life, but his drive stems from a single obsession: the pursuit of the perfect taste. Three-Snake Bouillabaisse, Pickled Wolf’s Heart and Flamingo Tongue are just some of the delicacies he devours on his journey toward the ultimate feast.

But beyond the palace walls, revolution is in the air and the country is clamouring with hunger of a different kind.

Not SFF, but The Last Banquet was beautiful. Jean-Marie’s journey through life was stunning to behold. 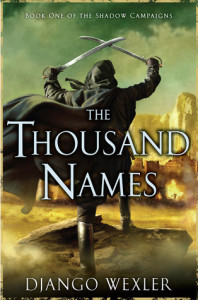 Enter an epic fantasy world that echoes with the thunder of muskets and the clang of steel—but where the real battle is against a subtle and sinister magic….

Captain Marcus d’Ivoire, commander of one of the Vordanai empire’s colonial garrisons, was resigned to serving out his days in a sleepy, remote outpost. But that was before a rebellion upended his life. And once the powder smoke settled, he was left in charge of a demoralized force clinging tenuously to a small fortress at the edge of the desert.

To flee from her past, Winter Ihernglass masqueraded as a man and enlisted as a ranker in the Vordanai Colonials, hoping only to avoid notice. But when chance sees her promoted to command, she must win the hearts of her men and lead them into battle against impossible odds.

The fates of both these soldiers and all the men they lead depend on the newly arrived Colonel Janus bet Vhalnich, who has been sent by the ailing king to restore order. His military genius seems to know no bounds, and under his command, Marcus and Winter can feel the tide turning. But their allegiance will be tested as they begin to suspect that the enigmatic Janus’s ambitions extend beyond the battlefield and into the realm of the supernatural—a realm with the power to ignite a meteoric rise, reshape the known world, and change the lives of everyone in its path.

Arguably the best debut of 2013 (there are several contenders), The Thousand Names is flintlock fantasy at its finest.  Winter makes a strong case for best character of the year as well. 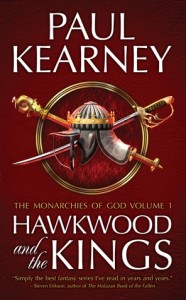 The world is in turmoil. In the east the savage Mer­duks, followers of the Prophet Ahrimuz, have cap­tured the holy city of Aekir. The western kingdoms are too distracted by internecine bickering to intervene and the Chruch seems more obsessed with rooting out heresy. It is an age where men go to the stake for the taint of magic in their blood, where gunpowder and cannon co-exit with werewolves and sorcerers. It is the turning point when two get reilgions will fight to the death and the common folk will struggle to merely survive.

Not nearly enough people have given Kearney’s Monarchies of God series a chance. It draws a distinct parallel to the the time around the Great Schism, and it offers an awesome sort of first-contact with Captain Hawkwood’s adventure to the New World. Also includes great characters. 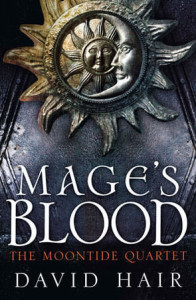 Most of the time the Moontide Bridge lies deep below the sea, but every 12 years the tides sink and the bridge is revealed, its gates open for trade.

The Magi are hell-bent on ruling this new world, and for the last two Moontides they have led armies across the bridge on ‘crusades’ of conquest.

Now the third Moontide is almost here and, this time, the people of the East are ready for a fight … but it is three seemingly ordinary people that will decide the fate of the world.

I enjoyed this more than many friends who’ve read it. Probably because I have a thing for reading about crusades. It’s a long one, but very worth it for the richly-imagined world. 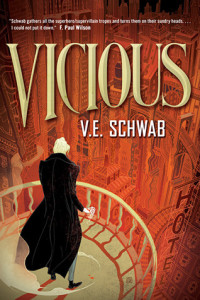 Victor and Eli started out as college roommates—brilliant, arrogant, lonely boys who recognized the same sharpness and ambition in each other. In their senior year, a shared research interest in adrenaline, near-death experiences, and seemingly supernatural events reveals an intriguing possibility: that under the right conditions, someone could develop extraordinary abilities. But when their thesis moves from the academic to the experimental, things go horribly wrong.

Ten years later, Victor breaks out of prison, determined to catch up to his old friend (now foe), aided by a young girl whose reserved nature obscures a stunning ability. Meanwhile, Eli is on a mission to eradicate every other super-powered person that he can find—aside from his sidekick, an enigmatic woman with an unbreakable will. Armed with terrible power on both sides, driven by the memory of betrayal and loss, the archnemeses have set a course for revenge—but who will be left alive at the end?

In Vicious, V. E. Schwab brings to life a gritty comic-book-style world in vivid prose: a world where gaining superpowers doesn’t automatically lead to heroism, and a time when allegiances are called into question.

Vicious is an incredibly addictive and accessible superhero novel. For people like myself who don’t enjoy the normal (heh) invincible spandex and cape-wearing heroes, Schwab gives us something to work with. 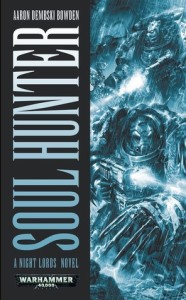 The Night Lords form an uneasy allegiance with the Black Legion in order to assault the valuable planet of Crythe Primus. The Imperial world puts up a stern defence, but the biggest obstacle to success will be the disunity and mistrust between the two Legions. Will their covenant last long enough for them to succeed in their mission?

Warhammer 40k books are the kind that you see mixed feelings about. Naturally, you have to like the setting of 40k to even think about delving into a book about it, so you don’t really catch people who “don’t normally read sci-fi” reading 40k. Soul Hunters is easily the best 40k book I’ve read, and ADB is one of the best Black Library has to offer. 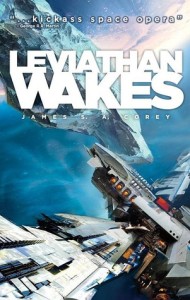 Humanity has colonized the solar system – Mars, the Moon, the Asteroid Belt and beyond – but the stars are still out of our reach.

Jim Holden is XO of an ice miner making runs from the rings of Saturn to the mining stations of the Belt. When he and his crew stumble upon a derelict ship, “The Scopuli,” they find themselves in possession of a secret they never wanted. A secret that someone is willing to kill for – and kill on a scale unfathomable to Jim and his crew. War is brewing in the system unless he can find out who left the ship and why.

Detective Miller is looking for a girl. One girl in a system of billions, but her parents have money and money talks. When the trail leads him to “The Scopuli” and rebel sympathizer Holden, he realizes that this girl may be the key to everything.

Holden and Miller must thread the needle between the Earth government, the Outer Planet revolutionaries, and secretive corporations – and the odds are against them. But out in the Belt, the rules are different, and one small ship can change the fate of the universe.

I put off reading Leviathan Wakes for way too long. As everyone says, it basically a sci-fi action movie in book form. A combination of noir, kickass space opera, and horror, it’s not something you want to miss. 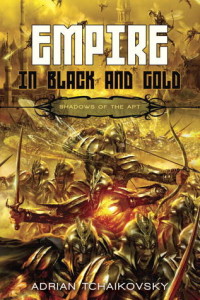 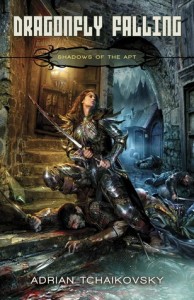 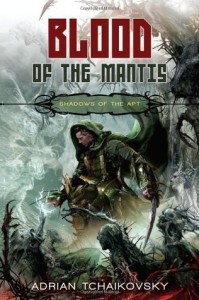 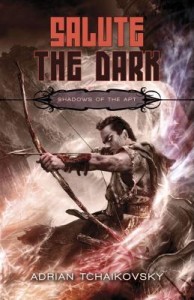 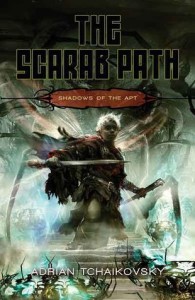 Too many blurbs to post. If you’ve ever read my blog you know that I’m a huge fan of Adrian and his work. Currently partway through book six and Shadows of the Apt is easily one of the best series I’ve ever read. Do yourself a favor and check them out. Incredibly unique and with great characters.

There you have it. It was a great year for books and there’s no reason to think 2014 will be any different. Happy holidays, everyone!