Empires of the Sea by Roger Crowley 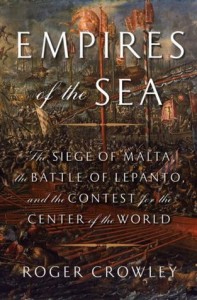 The centuries-long conflict between East and West, Muslim and Christian, comes to a head in the Sixteenth century Mediterranean Sea. Crowley details the fascinating rivalry between Charles V, Holy Roman Emperor, and Suleiman the Magnificent of the Ottoman Empire. Their greatest victories, their most ignominious defeats, and everything in between are brought up at one point or another.

The Great Siege of Malta, as reviewers all over the place say, is a point in time that begs to be adapted by any entertainment medium. Somewhere around 7,000 Christians made a heroic stand against upwards of three times their number in the great fortress-island of Malta. Led by Grandmaster Jean de Valette of the Knights Hospitaller, the very citizens themselves put forth the most effort, according to Crowley, in defense of their home and hearth. Crowley definitely stresses Philip II of Spain’s epithet: the Prudent, in relation to the great siege. The course of history has proven that Christendom is utterly incapable of uniting for a common cause, and it’s fascinating to see how down to the wire the siege was due to Philip’s extreme cautiousness.

The Holy League, vigorously promoted by Pope Pius V, in the spirit of “united” Christendom, which took ages to even have the various Christian rulers assent to involvement, finally took to the sea at the Battle of Lepanto is the culmination of the period, where the Christian fleet shattered the larger Ottoman navy in a battle of nearly 500 ships. The young Ritter Johann von Österreich, commonly known as Don Juan of Austria, just 24 at the time, led the massive coalition fleet that included Miguel de Cervantes to the great battle against Ali Pasha, the Grand Admiral of the Ottoman Navy, and very much a mirror image of Juan himself. Juan’s leadership inspired G.K. Chesterton’s 1911 poem, named after the eponymous battle.

Crowley lays out a detailed (surprising for its length) narration and analysis of the Mediterranean between the Siege of Rhodes in 1522 and Lepanto in 1571 – not particularly favoring one side or the other, though it is difficult as a reader not to feel some sort of good at sieges where the defenders are hugely outnumbered. The narration itself is bloody and the bodies pile up in masses, turning the very sea that the galleys slice through crimson.

This is historical non-fiction at its best, with a strong, flowing narrative style that brings the characters of both sides back to life in a readable amount of pages (though I listened to the audiobook), complete with stats and strategies for military history buffs all the while remaining exciting as hell to read. Empires of the Sea only scratches the surface of the nearly three hundred year conflict.

And John Lee’s narration was fantastic. The man could read a fuckin’ shopping list and have me panting at the end, completely enraptured. “DON’T WE NEED APPLES TOO? AND CLAM CHOWDER? AND ANOTHER TWO POUNDS OF BACON?”

“Heroes are people who face down their fears. It is that simple. A child afraid of the dark who one day blows out the candle; a women terrified of the pain of childbirth who says, ‘It is time to become a mother’. Heroism does not always live on the battlefield.”