“I am Constantine Palaiologos, emperor, son of Caesars. I am a baker, a ropewright, a fisherman, a monk, a merchant. I am a soldier. I am Roman. I am Greek. I am two thousand years old. I was born in freedom only yesterday. This is my city, Turk. Take it if you can.” 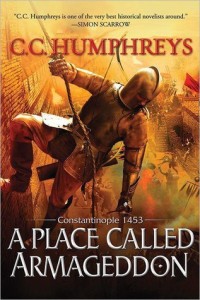 It’s 1453, and the Byzantine Empire is an empire only in name. Its last bastion is Constantinople and the brilliant, arrogant young sultan of the Ottoman Empire, Mehmet II, has his sights set on it, set on completing his father Murad’s work in eliminating his Greco-Christian foes once and for all. Murad was everything his son was not – statesman, soldier, commander – and Mehmet’s accession to the throne saw him immediately shadowed by his father’s legacy. Mehmet, however, was exceedingly arrogant and fancied himself akin to Caesar and Alexander, and he set his eyes upon the walls of Constantinople to prove himself worthy of the title Fatih, conqueror – the walls his ancestors had dashed themselves upon siege after siege for a millennium to no success.

Gregoras Lascaris is a man betrayed and exiled from Constantinople. His face is disfigured and missing a nose, and he has no desire to ever return to the city he once called home. Travelling and selling his sword under different names, fate ends up calling him back to Constantinople, where he discovers his twin brother Theon, his betrayer, married to his lover Sofia. Fictional characters from a historical family stand alongside many historical characters that Humphreys portrays exceptionally well.  The aging Constantine, emperor of but one city, who sees his people facing their doom, the heroic Genoan Giovanni Giustiniani Longo leading the defense of Constantinople, the innovative German/Scottish engineer Johannes Grant, the aforementioned Sultan Mehmet, as well as some more minor characters fighting for reasons beyond plunder.

Mehmet was truly brilliant (historically as well) despite his somewhat childlike tantrums when he didn’t get his way. For a taste: can’t get your ships through the chain blockading the Golden Horn? Try laying a bunch of greased logs along the shore and rolling the ships to the side! Yes, he actually did these things.

Humphreys nails the blend of historical accuracy and fiction, from the thunder of Basilica, the 27-foot long cannon that launched massive 600lb cannonballs more than a mile to the fierce fighting on the walls, the citizens of Constantinople fighting for their very livelihoods. What follows is a heartbreaking story which, despite knowing its historical end, was still gut-wrenching, down to Constantine’s final charge.

Do yourself a favor if you enjoy historical fiction as deftly written as Christian Cameron and Paul Kearney.

“Oh my lords, my brothers, my sons, the everlasting honour of Christians is in your hands.”
Κωνσταντῖνος ΙΑ’ Παλαιολόγος

3 thoughts on “A Place Called Armageddon by C.C. Humphreys”