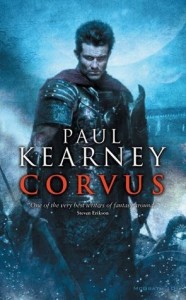 Roughly 25 years after Rictus and his Dogsheads returned from the epic march of The Ten Thousand, the man is still a mercenary, but this time when his contract ends he’s contemplating retirement. He’s no longer a young man. As he settles back into farm life, tales begin to reach his secluded farmhouse of a young upstart named Corvus who desires to unite the Macht under one king. Corvus is clearly a model of Alexander the Great in nearly every way but for his lack of royalty in Corvus, down to the Companion Cavalry. He’s a brilliant tactician, he’s charismatic, and he’s mightily ambitious. He’s heard the legend of Rictus, the Dogsheads, and the march of the Ten Thousand since he was a child, and he wants the man himself to aid him in his conquest of the Macht.

The spear by the door.

So says one of the part headings of Kearney’s Corvus. I think that it’s a very poignant phrase in its simplicity. Rictus wants to leave the life of soldiering, but he can’t – it’s such a part of him that he isn’t sure what he would do without it. The spear by the door is a constant reminder of what he is: a killer of men. And it’s something he knows, as is shown in his constant return to the life of a military man. He’s strikingly similar to Christian Cameron’s Arimnestos in his Killer of Men series. The two characters are very similar in that their lives and families have been brutalized by their choice of profession, but they simply can’t leave it or escape it. It’s a very relevant phrase to today’s life as well, as there are many soldiers who continue to re-enlist in the military because it’s all they know.

Not only are their characters alike, Cameron and Kearney are very similar authors as well. They both have a very strong grasp on historical accuracy, although Cameron writes historical fiction (and fantasy as Miles), and Kearney writes fantasy very strongly influenced by historical events. They’re both masters of throwing you into the phalanx, from the terminology such as aichme & sauroter – the two ends of a spear, to the chiton, the tunic worn by ancient Greeks, and so on. With both authors, you can see yourself in the phalanx with men shouting, gore soaking down your spear. Perhaps my favorite thing that both authors include in their Greek (or Greek-influenced) fiction is the inclusion of the Paean. The Paean was the battle-hymn that ancient Greek armies would sing upon marching into battle, both for a sort of motivation and to instill fear in your enemies. It’s chilling in the way each of them write it, imagining a body of soldiers singing as they charge at you with blood in their eyes.

Corvus, like The Ten Thousand and pretty much everything that Kearney writes is a brutal story. When shit hits the fan for Rictus or whoever he writes about, Kearney scoops it back up and tosses it right back into the fan. When you things can’t get any worse, they probably can. One of the author’s strength is his character development, and you end up rooting for the people on both sides of the conflict. Karnos is the Speaker of Machran, basically the head of the people for the most part, and he’s the main non-Rictus point of view character. Kearney makes you empathize with him, a man whose homeland and home city is under siege.

If you’re a fan of military fiction, Kearney writes some of the best.

2 thoughts on “Corvus by Paul Kearney”