The Ill-Made Knight by Christian Cameron 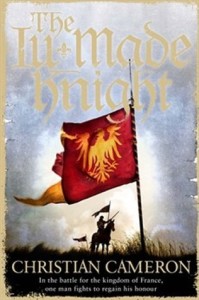 It seems like every other book that I read is by Christian/Miles Cameron. After finishing The Ill-Made Knight, the first in Cameron’s Chivalry(?) series, I am convinced that the man cannot write a bad book. He’s able to write medieval and ancient historical fiction as well as fantasy without really suffering from the sort of timidity that many writers do when trying to write in an unfamiliar genre. Granted, the change from medieval historical fiction to medieval fantasy isn’t as drastic as it would be from medieval historical fiction to something like a science fiction thriller, but it still takes great skill.

William Gold was born a common boy, dreaming what all medieval European boys dreamt of becoming – a knight. Shortly after the tale begins, however, Will runs into trouble and is branded a thief, an outcast. He becomes the squire for one Sir Robert, and thus the tale of his long, arduous journey to knighthood begins. The Ill-Made Knight is set during the Hundred Years’ War between France and England, with a vast array of famous figures present – Geoffrey de Charny, Bertrand du Guesclin, Geoffrey Chaucer, the Black Prince of Wales, John Hawkwood – you name him, he’s probably there.

I think that’s the biggest selling point with Cameron’s novels – the authenticity. With a lot of medieval fiction, be it fantasy or historical, knights and soldiers will simply be men covered in metal wielding metal sticks. With Cameron, you get a full experience – each piece of armor has a name, weapons are unique, there are different fighting styles, and so on. Sometimes reading about Will put on his armor (via his squire) might be considered slow, but more often than not it adds to the incredible immersion that Cameron goes to great lengths to satisfy, including significant research and reenactment. I believe that immersion is what makes historical fiction so great. In fantasy and science fiction you’re often taken to completely new worlds, and in historical fiction you are given the chance to almost re-live a past time period if the author’s talented enough. Cameron certainly is.

There’s always been a romanticized view of the knight – full of chivalry and proper behavior. In The Ill-Made Knight, Cameron shows the darker side, and in many cases the side that was more prevalent in the middle ages. The mercenaries, many of them knights, in what would be known as The White Company, were hardly more than brigands while in France, pillaging where they pleased and furthering the point that war is hell.

The resulting story that Cameron provides is both informative and incredibly entertaining, with historical characters brought to life. I can’t recommend his books enough.