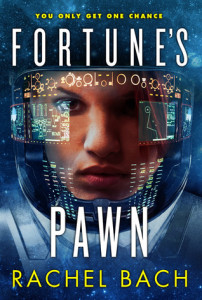 Deviana Morris is the kind of woman who would fit right in in the Warhammer 40k world. She’s a quick-to-anger, ambitious, ass-kicking mercenary who loves to smash skulls, sleep around, and she drinks enough to put Homer Simpson to shame. She has her eye set on becoming a Devastator, an elite group of soldiers serving directly under the Sacred King. To have a shot at joining the Devastators, she takes a job aboard the Glorious Fool, a ship renowned for its run-ins with various forms of trouble and the trail of dead mercenaries it leaves behind.

Rachel Bach is the not-so-secret identity of Eli Monpress author Rachel Aaron. That said, anyone who knows about Aaron’s work will go into Fortune’s Pawn anticipating a book with plenty of action and fun characters. Aaron herself, and therefore nearly every review, calls the book an action-packed space romance, and there is no more apt phrase to describe it.

Devi is a Paradoxian, and Paradoxian mercenaries roll out in full suits of power armor that give the user superhuman strength and any other kind of advantage you can think of. The armor allows the mercs to charge right into the thick of things, and that’s where most of Fortune’s Pawn brings you – in the thick of things. Plasma shotguns, armor-piercing pistols, energy swords (Devi has named them all, too). Various methods of destruction are at Devi’s disposal in her skirmishes with aliens. We’re not talking humanoid “we come in peace” aliens, we’re talking Sigourney Weaver in the original Alien I-want-to-eat-your-face aliens.

Shortly after going aboard the Glorious Fool, Devi, who’s not used to falling in love at all, falls for Rupert. I found it hilarious how many people commented on the choice of the dude’s name. Rupert Charkov? Potentially the most British name in the history of British names (besides perhaps Winston) and the ending-in-‘ov’ Russian last name. Various characters appeared in my mind upon hearing the name Rupert, but none adding more to my humor than Rupert Grint. Jokes aside, Rupert’s a hunk. A heartthrob. He’s a Herculean man of perfect proportions (and abs that may actually be made of rock) and probably the worst possible person for Devi to fall in love with. Does that stop her? Nope.

Fortune’s Pawn was a lot of fun. It’s similar in style to David Dalglish’s Dance of Cloaks in that it’s enjoyable to read but not particularly deep (though the former has a bit more content than the latter). A comfort read. And there’s not a damn thing wrong with that.