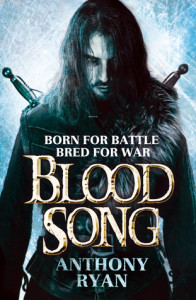 The Brothers of the Sixth Order are the swords of the realm. They kick ass and smite unbelievers. Vaelin Al Sorna was left at the doorstep of the Order when he was just a boy of ten, as his father rode off into the mist. Vaelin will spend the next many years training in the arts of war, making both friends and enemies. Vaelin’s father held the title of Battle Lord, the highest possible honor to be acquired, so Vaelin’s got a lot to live up to.

Anthony Ryan initially self-published Blood Song at the beginning of last year, and I stumbled across it while perusing Amazon one day. It piqued my interest, so I bought it, but for some strange reason I never ended up reading it. Fast-forward a year, and Anthony’s been picked up by Orbit and Blood Song is one of the highest rated books I have ever seen (and it was a self-published debut!). As the days went on, more and more great reviews popped up until I finally caved.

I can’t pass up a good coming-of-age-in-school story. If there’s one trope I don’t think I will ever tire of, this is it. Being able to follow the character(s) through their journey into adulthood while at the same time seeing them go through the trouble that school often brings (almost) always provides a well-rounded tale. Whether it’s Rowling, Rothfuss, Grossman, Le Guin, or Ryan, I love ’em.

Blood Song features a similar narrative to Rothfuss’s Kingkiller Chronicles in that it has the protagonist relaying their past to another person. In the work of Rothfuss, the Chronicler is the listener, and in Blood Song, Verniers Alishe Someren records the tale. Where Rothfuss succeeded, Ryan didn’t quite hit the mark. Vaelin told his story, but we read it in a fully third person perspective, where any time Vaelin would have said “I”, the story replaces it with his name. It’s as if, while Vaelin told the story, Verniers had the skill to actively change “I” to “Vaelin” and so on throughout while keeping pace with the tale. In Kingkiller, we had a first-person tale within a third-person one, and it worked very well. Blood Song had it different, and though it was still very good, it wasn’t quite there. I’ve always had a problem with novels that used the story-within-a-story narrative. How are we supposed to believe the character has an impeccable memory and can remember what he ate on any given day twelve a decade or more ago? It just seems unrealistic. It’s a different approach to the split past/present narrative that many novels use, and it’s a nice change once in a while, but it’s hard to believe.

We follow Vaelin and his brothers through their journey into adulthood, through their training and through their tests. The characters are trained in the art of killing, so their flaws are seen in their struggle to make moral decisions, including some that go against the Faith and against their teaching. Ryan particularly shines in the tests that Vaelin faces, whether they’re in school or on the field of battle, they’re damn fun to read.

You’ll find nothing new in it, but when a debut author can kick in the door and slap a book like Blood Song down on the table you can’t help but be impressed.

If for some reason you haven’t read this yet, there’s a point at which the reviews don’t lie, so buy it now

One thought on “Blood Song by Anthony Ryan”