Sea of Ghosts by Alan Campbell 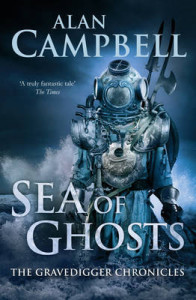 I stumbled across Campbell’s Sea of Ghosts back in May, and what caught my initial interest was the cover. A man in heavy diving gear trudging out of the depths with some fierce looking weapons strapped to his back – but the book dropped further and further down my list while more books were added. It returned to my attention at the words of Stefan of Civilian Reader and after jumping through some hoops to get my hands on a copy, I dove in.

Emperor Hu has decided to disband the Gravediggers and order their execution after an insult from Colonel Thomas Granger, and Granger’s path of escape leads to a life as a prison warden in Ethugra. Little does he know that his next pair of prisoners are his most unique yet. Enter Ianthe and her mother, Hana. Ianthe is blind and deaf, but she’s able to see and hear through other people’s eyes and ears no matter where they are in the world. From the Emperor himself to a Drowned listing lazily beneath the brine, she can ‘become’ them. When Ianthe’s talents are revealed, Sea of Ghosts becomes a story of greed and betrayal by many characters.

If the prologue to Sea of Ghosts doesn’t pique your interest in one way or another, something may be wrong with you. Right off the bat, we’re dropped into one of the most unique and atmospheric settings I’ve encountered in the genre. The Gravediggers, equipped with hand-cannons that appear to be vaguely similar technologically to muskets, are perched on some bookshelves to avoid the water below them. Why, you ask? The water, brine as it’s called in the book, is toxic. If you dip your hand into the brine, your skin bubbles and burns away and the exposed skin turns grey – into what Campbell calls sharkskin. Enough exposure to the brine will deteriorate you inside and out. Toxic water? Check. Enter a small child. Innocent, right? Wrong. There’s a race of magicians of a sort called Unmer, and she’s one of them. Mysterious race of wizards? Check. Crash! A dragon in full body armor comes barreling in. Sea of Ghosts is an awesome mash-up of genres that is potentially my new favorite – science fantasy.

Campbell does a great job describing how run-down and deteriorated the world is, particularly in the prison-city of Ethugra. Buildings are falling apart, brine is eating away at everything. There’s a ‘species’ of creatures called Drowned that, while interesting, could have been so much more. The Drowned are regular humans exposed to the full extent of the brine – people covered in sharkskin. They no longer function as normal humans and their brains are severely deteriorated, only allowing them to complete basic tasks. At one point in the story, a character sees a lantern moving about in the depths of the brine. The lantern is carried by a Drowned who looks up through the filthy water and makes eye contact with the character. This should be terrifying, right? Instead of using the Drowned to add an aspect of true horror that would have perfectly fit the story, the confrontation is relegated to a normal occurrence and the character shrugs it off. Aside from this, Sea of Ghosts proves that science fantasy needs to become a real genre and needs far more attention. Firearms, swords, armored dragons, steamships, some of which are run by ghosts, magic, alchemical and other technology such as void energy, where the energy passes through and devours any substance with ease – if pulled off, how can it not be awesome? Campbell certainly pulls it off.

Some stories thrive on characters of grey morality, like George RR Martin’s A Song of Ice and Fire and Steven Erikson’s Malazan. Others, like Jason M. Hough’s Dire Earth Cycle, incorporate characters that are easy to hate. Sea of Ghosts has some despicable characters you’ll love to hate, a few of degrees of varying morality, and some that you’ll empathize with and/or root for. Characters that aren’t inherently bastards or paragons of virtue are great – they allow you to empathize with people from both sides of the conflict. But sometimes it’s necessary to have ones you hate, ones whose heads you would hold under the toxic brine until they stopped struggling. Campbell has struck a good balance, allowing for a very fast-moving pace.

The only benefit of waiting to read Alan Campbell’s Sea of Ghosts is that now the release date has been announced for the sequel, Art of Hunting, as November 21st of this year, and that’s a hell of a lot closer than it would have been if I’d read this back in May. I can only hope Campbell has plans for a prequel series in which we get to see the Gravediggers in action, as they felt a lot like Erikson’s Bridgeburners to me.

Find Sea of Ghosts on:
Amazon (US)