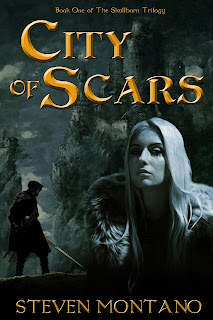 After reading Steven Montano’s Blood Skies, I became a fan of his due to the fast-paced gritty action of the novel. City of Scars, the first in the Skullborn trilogy, is somewhat more “traditional” epic fantasy than Blood Skies.
Here’s the blurb:

“It’s been three decades since the Blood Queen led her legions on a brutal campaign of conquest and destruction, and the Empires are still struggling to rebuild.  Now, in the distant aftermath of the war, the real battle is about to begin.

Haunted by the crimes of his past, fallen knight Azander Dane ekes out a mercenary existence as he drifts from one city to the next.  His latest job is to hunt down Ijanna Taivorkan, a powerful outlaw witch desperately seeking a way to escape her destiny.

Dane and Ijanna find themselves in Ebonmark, the City of Scars, where deadly crime guilds and shadowy agents of the White Dragon Empire prepare for a brutal confrontation.  Pursued by apocalypse cults, mad alchemists, exiled giants and werewolf gangs, Dane and Ijanna soon learn a deadly lesson – in Ebonmark, only the cruelest and most cunning can survive.

City of Scars is the first volume of The Skullborn Trilogy, an all new epic fantasy adventure from the author of the Blood Skies series.”


Needless to say, I’m excited to read City of Scars, which is due out on the 28th of June, 2013.
Steven’s website can be found here.

“Two things are infinite: the universe and human stupidity; and I’m not sure about the universe.”