Between Two Fires by Christopher Buehlman 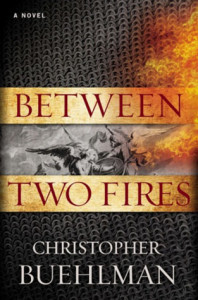 Partway through my Scribd free month wherein I tried to cram as many audiobooks in as possible (which ended up being about 4 and change), Fantasy Review Barn hosted T. Frohock in a Tough Traveling post that mentioned Between Two Fires. I’d stumbled across the book about a year ago and proceeded to do with any book I stumble across that looks interesting: toss it on the pile (pile in this case thankfully only meaning digitally on Goodreads). After seeing the post, I took another look it it, and boy am I glad I did.

It’s 1348, and the Black Death has absolutely and wholly decimated Europe. The Hundred Years’ War rages on in Edward III’s bid for the French throne. Thomas is a knight disgraced and now roams the roads with a small band of brigands, making bad days worse for who knows who many people. When his crew comes to a mostly abandoned Norman town, they find a girl recently orphaned by the plague. The girl tells Thomas of a second war on heaven, of which the Black Death is but a part, and where Lucifer and his armies are using Earth as a battleground in their assault on heaven and its champions. She manages to convince Thomas to travel with her across plague-and-war-ravaged France toward Avignon, the seat of the papacy at the time. Thomas, having abandoned faith like countless others must have during the Black Death, has an admittedly difficult time believing anything this girl says, and worse yet, the reason behind her insistence on travelling to Avignon is still unclear, both to her and to Thomas. She knows only that there is evil there that must be confronted.

There’s a definite feeling of escalation throughout Between Two Fires, and the dangers that Thomas and the girl encounter on their pilgrimage are perhaps the best representation. When they set out, danger comes in the form of bandits and brigands. Men like Thomas. Thomas channels his inner Geralt of Rivia shortly into their journey and partakes in same monster-slaying, and the threat just grows and grows from various forms of undead, to angels and demons warring in the skies, to an absolute abomination composed of massed together human limbs. It’s in his ability to so vividly describe these demonic horrors that Buehlman shines. I’ve never been a particular fan of novels categorized as straight-up horror, but when historical fiction, science fiction, or fantasy comes along with a horror element along the vein of the vomit zombies from the Expanse series and now basically anything in Between Two Fires, I absolutely love it.

Between Two Fires touches on some poignant themes, and religion plays a heavy role. Buehlman puts extreme emphasis on arguably one of the most-asked questions in religious history: if any god exists, how can he allow something so horrible (the Black Death in this case) to happen? It’s a big question and of course, has no answer, but it’s something that even the non-religious can appreciate.

“Just another pile of dead in a dying world God had left behind.”

Thomas is well beyond asking the question, but he’s a sort of microcosm of the events that are occurring around him: profane, blasphemous, dark and obscene. He’s a man on a path of redemption he isn’t actively seeking, and the girl is his steadfast guide with unwavering resolve, his perfect opposite.

When it comes to narrators, I’ve found that there are generally two types: narrators and actors. The former tend to just read the text, where the latter put clear inflection on each different voice so that they’re easy to differentiate. Both have their merits, depending on the story being told. Steve West is the latter. He had the perfect voice for the kind of man Thomas is, and his tone with the girl is excellent at emphasizing that she’s the picture of innocence in a world where innocence is long lost to war and pestilence. The demons that rise from the depths of hell to bar their way are voiced with chilling cadence.

Buehlman’s Between Two Fires is as Thomas is: profane, dark, and fascinating.

“Never forget what you are, for surely the world will not. Make it your strength. Then it can never be your weakness. Armour yourself in it, and it will never be used to hurt you.”