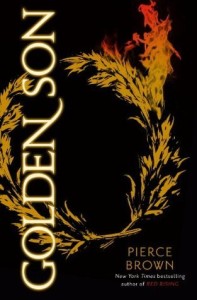 When I finished Pierce Brown’s debut Red Rising last year, apart from being stunned by how good it was, I sat still and contemplated how it was labeled as a young adult book. YA is one of those genres that has never worked for me, right there alongside urban fantasy. Red Rising had the setting that is ever-popular in YA: a dystopian class conflict where people of the young adult age group fight to the death while others watch. But my issue, if you can call it that, was in a few different points. First, novels with young characters don’t necessarily make the novel YA. Second, while it did utilize the dystopian setting that is immensely popular in YA, I don’t know if I could automatically assume the novel itself is YA. Third, Brown doesn’t really go out of his way to explain various things that could be inferred, which, from what I’ve read in reviews of popular series in the genre, is something that can categorize a novel as YA.  The series is extraordinarily brutal as well. That’s not to say YA can’t be dark, but here, the reader is inundated in the brutality and the blood of loved characters. What I take away from my enjoyment of Red Rising is that these genre defining features still don’t necessarily define what goes where.

Anyway, in Golden Son, Brown did what so many recent debut authors that I’ve read have done, and that is moving from strength to strength in order to make exceptionally engrossing second-in-a-series novels. The playing field has grown, and Darrow au Andromedus has moved from the Institute to a much wider playing field, completely immersed in the power plays of the Golds. Darrow’s original plan to destroy the Society from within becomes more and more difficult the closer he gets to his fellow students and friends. He’s forced to make some seriously difficult decisions, and this is where he really shines. He never truly forgets who he is or where he came from, and this sets him apart from the other Gold-born characters, many (most) of whom have no regard for the lives of other Colors.

Throughout Golden Son, Darrow also begins to think more like a Gold, and although he may not make typical Gold decisions, he sees through their eyes and it sort of rationalizes these decisions in a way that anyone of a different Color and not living within Gold society couldn’t possibly understand. In his distinctly unique situation, Darrow comes to terms with a very important aspect of life: friends and the strength through the friendship they provide, and how easily it can slip away.

The cast of characters broadens to interesting new faces like the legendary swordsman Lorn au Arcos and the awesome Telemanus family, as well as expands on recurring characters like Mustang, the Jackal, and perhaps most importantly Nero au Augustus himself. One thing I noticed in Golden Son as a result of the broader cast was that the different Colors used their periodic abbreviation as the bridge between family name and given name. I did see it in the Golds mentioned in Red Rising, but I assumed it was a Gold tradition. With new named characters like the Silver, Regulus ag Sun, this extremely clever convention is revealed in full.

Pierce Brown’s Golden Son is a truly fantastic novel. It bends the defining aspects of the genre until they break, and the cliffhanger will leave readers around the world catatonic, desperately crying out for the concluding volume.