Defenders by Will McIntosh 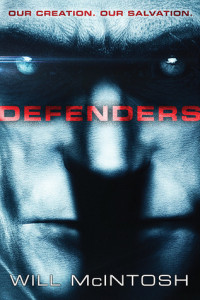 Last year, Will McIntosh’s social science novel Love Minus Eighty took many genre readers by surprise in its exploration of human feelings. McIntosh changed things up this time around with Defenders, a novel about an alien invasion of Earth.

An alien race known as the Luyten have invaded Earth, wreaking havoc throughout the planet with their heat guns, melting people, cars, and buildings alike. The Luyten have a distinct and incredible advantage over humanity – they’re telepathic. They can read minds. How unfair is that? Turns out it’s extremely unfair, and humanity is on the brink of destruction; thousands are dying whenever a group of Luyten – often called “Starfish” by the protagonists – attack. Nothing Earth’s generals can come up with works because the Starfish know it’s coming. In a last-ditch effort, Earth’s most brilliant minds create the defenders – seventeen foot-tall beings who know nothing but war. They’re missing serotonin, the chemical in the brain that controls feelings, therefore the Luyten can’t use telepathy on them.

The blurb is fairly misleading in that upon reading it, you’d think that the war is over and the issue of what to do with the defenders is the main plot. Nearly half of the story is actually prior to the engineering of the defenders, while humanity is getting its ass kicked by the Luyten. We’re brought through the brutality of the war through the eyes of Lila, Oliver, and Kai, and no punches are held. McIntosh’s prose is elegant, but also simple – something I’d liken to Mark Lawrence. They both write beautifully, but succinctly – not flowery, overbearing, or “purple” as some call it. The structure of Defenders is strange in that, as mentioned before, the blurb doesn’t describe the novel’s full plot, and thus it’s difficult to talk about without spoiling.

Defenders is a deceptively deep novel. On the surface, it reads fast, but beneath it, McIntosh continues his exploration of human nature and what it is to be human. One scene in particular stood out:

Humans made defenders with three legs, because you see us as valuable, but not as valuable as humans. Mammals have four legs, insects six, and Luyten either six or seven. So killing a Luyten means nothing, but you should only kill a dog if you intend to eat it. Do you think that makes sense?

It’s very thought-provoking stuff. The interactions with the defenders are where it really stands out. Lacking serotonin and therefore emotion, they try to do things that they see humans do in their warlike manner, but the effect isn’t the same as it would be if a human did it. The inability of the defenders to properly interact with their creators leads them to distance defender society from that of the humans, and that’s when the conflict mentioned in the blurb begins.

Will McIntosh’s Defenders is definitely one of the best science fiction novels I’ve read in recent time. The characters are deep enough that you’ll feel various things for them, ranging from annoyance, to hatred, to love, and that’s where McIntosh thrives – in his characters. Orbit continues to earn its reputation as one of the top publishers in the business.

Defenders is out May 13th from Orbit.

4 thoughts on “Defenders by Will McIntosh”

“Bran thought about it. ‘Can a man still be brave if he’s afraid?’
‘That is the only time a man can be brave,’ his father told him.”