Originally posted at Bastard Books. This was the first full review I’d ever written. 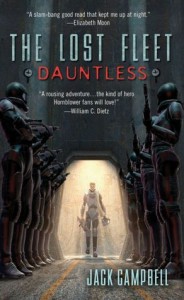 I’m relatively unexplored, so to speak, in the SciFi genre. I wanted a book that would be a quick, entertaining read, and Dauntless looked like it would fit the bill. If you’re looking for a book with a deep story with a cast of three-dimensional characters, Dauntless is not what you seek.

Dauntless is the first in Campbell’s The Lost Fleet series and it begins with John “Black Jack” Geary having been frozen in hibernation for a century. Before his hibernation began, the Alliance had been fighting a war against the Syndicate, or Syndics as Campbell often calls them, and Geary went down in a blaze of glory in holding off the Syndics in order for the rest of the fleet to escape. Only he didn’t go down, he managed to jump into an escape pod and begin hibernation when no immediate rescue could be seen. Upon being rescued, he is thrust right back into the same war he had been fighting a century ago. Now obviously a century will cause some changes to everything, but Geary returns to see himself worshiped as a hero; as a model that all new recruits aspire to be. Sailors swear by his name, i.e. “Black Jack himself couldn’t get us out of this mess”. Needless to say, Geary is quite disturbed about how he is portrayed and continually attempts to dissuade his sailors that he is not some sort of legend.

His return is also marred by the fact that a century of war has drastically changed the way the Alliance Navy works. Sailors no longer salute, which leaves Geary baffled many times in the outset of the book. The Navy now no longer uses tactics to win battles, and instead urges captains to charge head-on as if they were Black Jack himself, claiming that the only important things were to achieve glory and honor. Throughout the book we see Geary appalled time and time again at the deteriorated state that he sees the once glorious Alliance Navy in. Not only have the traditions such as saluting vanished, Geary has to deal with insubordination as well. A few of the captains under him determine, based on the legend, that they do not like him, as if he created the legend himself. Though the story is told in third person, Campbell thrusts us into the mind of Captain Geary throughout, and we see his train of thought on certain situations as well as the possible outcomes. The third-person limited thought process allows us to feel for Geary as he tries to adjust to the change in technology.

Since there is no world to come alive before us due to the fact that the entire book is based on a single ship, the Dauntless, Campbell did a pretty good job trying to make us feel like we’re inside the ship as he describes it. In the conference room, he describes the technology well enough that I can paint a solid picture in my mind on how the likenesses of other captains essentially floated in the air as if in a normal conference in person. With what he had to work with (though he gave it to himself), Campbell did a fine job putting us in the ship.

While reading reviews for SciFi books I have noticed that some are so wordy that, to use a phrase I vaguely remember from another review, you’d need to be a physicist to understand what’s going on. There are some cool concepts in Dauntless, such as the utilization of the speed of light, especially in combat. There is no immediate scanner to pick up the exact movements of enemies and allies. There’s a delay based on how far away the other ship is. This adds tension in knowing the enemy has been in the same system as you for hours now and you didn’t find out until just now. Along the speed of light idea, a ship, when travelling around .2 light-speed, begins to distort the area around it in that another ship would need to predict its movements because it cannot be seen clearly on the scanner. The constant use of phrases like “Fox Five, turn three degrees and accelerate to .1 light-speed” was a little tiring during some combat scenes, but not all that overbearing, especially if you enjoy military SciFi.

The real downside to Dauntless that I was aware of going in was that there is no character depth. There are perhaps two real secondary characters and we somewhat learn more about them throughout, but not as well as most other books I have read. This may be a consequence of the third-person limited narrative style, but I think it has more to do with the fact that Dauntless is the first in a series. Though it isn’t Campbell’s debut, I find that many authors need to work out the kinks when beginning a series. The real focus is on Geary, and we struggle with him in trying to suppress this legend that he has become in his hibernation. It is a true “I didn’t ask for this” story. His character develops a bit in this 293 page book, but not all that much. The combat is well done and the book sets a fast pace, but nothing really appeared to be done. The fleet traversed a few systems and participated in a few skirmishes. Though I haven’t read the second book, I think that it would have been better if the first and second books were combined and perhaps slightly trimmed of some fat in order to make us feel like something significant happened. Another issue I had was the inconsistent use of vulgarity. In some situations “hell” and “damn” are used often, and then there are others i.e. “knocked us on our butt” where “knocked us on our ass” would fit the bill much better. In this inconsistency, Dauntless loses some of its seriousness.

The enjoyment you get from this book is based on the mindset you have when you go in. Like I said at the beginning, if you want a really deep story with really deep characters, this is not it. If you’re a military SciFi fan and want a fast-paced action book that’s a short, quick read, this might be for you. I went in with the latter mindset, so Dauntless was enjoyable for me outside of the points that I outlined because I went in expecting just these faults.

One thought on “Dauntless by Jack Campbell”