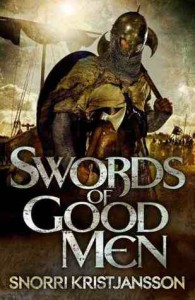 Jo Fletcher is a fairly new imprint for Quercus specializing in most of the speculative fiction genre. They started with a bang, and their list of authors includes some who’ve proven their mettle like Sarah Pinborough and Ian McDonald. They also have a slew of authors who have debuted within the last few years with success, like Aidan Harte, Mazarkis Williams, Tom Pollock, and David Hair. This year includes promising debut Snorri Kristjansson with Swords of Good Men, the first in the Valhalla Saga. After I’d found myself the victor of a giveaway for Aidan Harte’s Irenicon back in July, I decided to browse their catalog for authors of interest. After reading through all of the names, it was difficult to find one that didn’t catch my eye. I ended up requesting the one that stood out the most, and since I can’t resist a good Norse tale, they obliged and sent me Swords of Good Men.

After reading the first few chapters, I began to see that Kristjansson’s writing was very similar to Nathan Hawke’s and David Gemmell’s – there is no fluff. He tells the story how it is, without flattery and overbearing detail. But, more like Hawke than Gemmell, Kristjansson writes the violence with gory detail, making the action very fun to read – the kind of stuff you’d see on History’s new show, Vikings. Taking place in Norway, Swords of Good Men is much more historical fiction than it is fantasy, with the aspect of magic not appearing until the very end for the most part and in a supernatural way.

Swords begins with Ulfar Thormodsson and his cousin Geiri on their way to Stenvik, the last stop on a journey throughout the world before they can return home. Despite Kristjansson’s focus on the action rather than the world, he paints a very vivid picture of a Norse town in Stenvik. It feels real, down to the longhouse with barrel-chested men drinking mead and singing. A woman captures Ulfar’s heart with just a glance, and makes quite the enemy in the process. Ulfar and Geiri aren’t the only ones coming to Stenvik, though. The young King Olav Tryggvason, a Norse leader turned Christian, is moving west with his growing army in an attempt to bring the White Christ to the populace of Scandinavia. Skargrim has gathered a huge force of raiders and are advancing on Stenvik from the north with some kind of witch at the helm, and outlaws come out of the woodwork to harass the town as well.

Therein lies the biggest flaw of Swords of Good Men. Too many forces seem to be converging on this one small town. The book is split into many points of view, possibly too many, in order to help us keep track of all of these forces. Throughout the story we jump around from character to character, force to force, leading up to the penultimate siege – and the transition isn’t particularly smooth. If two of the main characters are in the same place, occasionally one paragraph would be spoken from one of them and the following one from the other, which made the story somewhat hard to follow.

Another problem with Swords was its length. It seems like a fairly standard story length for a debut at 352 pages, and it went smoothly until the last quarter. Shit hit the fan and had me turning page after page, the book glued to my hands. I buzzed through the last few pages and found the next page to be blank. The book was over. Too much had happened in the last 5 pages for me to wrap my head around immediately, and I think that the book, with the multiple point of view writing style, would have benefited from an extra 50 or so pages to smooth things out.

Despite what it may seem like by reading this review, I actually did enjoy Swords of Good Men because it had some very real characters and great action, though there were some flaws and those should be expected from a debut author. The choppiness did smooth out as the story moved along, and it’s clear that Snorri is steadily improving and the sequel looks to answer a lot of questions and I look forward to more action.

Find Swords of Good Men on:
Amazon (US)

2 thoughts on “Swords of Good Men by Snorri Kristjansson”