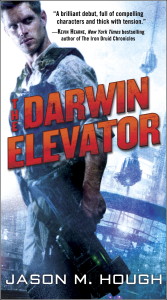 Jason M. Hough’s The Darwin Elevator marks my foray back into sci-fi after six or so consecutive fantasy and historical fiction books. It’s books like this that make me want to read more of the genre – pure, pulse-pounding action. I really love the recent trend in which a series is finished and is being released in consecutive months – minimal waiting and no chance of an unfinished series.

An alien force humanity dubbed as Builders sent an elevator down to Darwin to help speed up travel into orbit. Cool, right? Problem is, they forgot to mention that with the Elevator comes a plague, later called SUBS, that corrupts the human mind and essentially turns the carriers into mindless, subhuman creatures that are then called subs. The Builders weren’t complete bastards though, as the Elevator also came with a sort of aura that protects the city from SUBS.

We’ve got Skyler Luiken (I could not stop thinking of Skyler from Breaking Bad whenever I heard his name), the new captain of the scavenging crew aboard the Melville, based in the last bastion of humanity, Australia’s city of Darwin. Scavengers are the lifeline of Darwin, collecting things everyone needs to survive. Skyler’s an immune – one of the incredibly rare humans that are immune to SUBS – and he has a crew composed entirely of immunes. The crew – ops specialist Samantha, pilot Angus, engineer Takai, and sniper Jake – are unique enough in personality and make for a good, crew-based adventure. Being immune makes scavenging significantly easier, as an environment suit isn’t needed. Skyler spends much of the story adjusting to being a leader when he really isn’t cut out for it. When the Darwin Elevator malfunctions, people – like Neil Platz – in higher places take interest in using this unique crew of immunes for their own ambitions. Neil is the most famous man on what remains of Earth, pretty much the Donald Trump of The Dire Earth Cycle, and is a man of many secrets. The Platz family essentially owns everything worth anything in the area around the Elevator.

Neil is probably the only character that isn’t what he seems. There are characters like Russell Blackfield that do everything in pure self-interest, ones like Skyler and his crew who are in over their head, ones like Dr Tania Sharma who you’re bound to like, and then there’s Neil. Sometimes you want to smack him around and ask him what the hell he’s doing and others you want to give him a fist bump. Outside of Blackfield’s cookie-cutter and easy to hate characterization, the other characters were fairly well done. A word of warning though, Hough is absolutely ruthless, on par with GRRM, with the lives of his characters.

The plot was packed with suspense. There’s something special about being able to create such a large amount of tension in situations where nothing actually happens. While this is frustrating to some, it didn’t happen often enough to warrant frustration from me, and it was complemented by electrifying action sequences. Despite some minor choppiness transitioning from the high-octane scenes to the slower aftermath, the pacing was strong.

The cover of the US version makes The Darwin Elevator look very generic – military guy with a mean look and some sort of weapon – so if you like to ignore your mother’s advice and judge books by their covers, use the UK one at the head of this review. Jason M. Hough is definitely an author to look out for if you’re even mildly interested in sci-fi and look for The Darwin Elevator when it hits shelves on July 30th, 2013.

3 thoughts on “Review – The Darwin Elevator by Jason M. Hough”