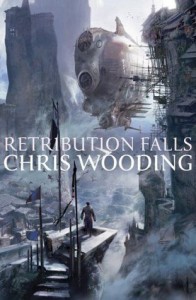 Retribution Falls is one rollercoaster ride of a book. There are some books that have one or two lines that make me smile due to their humor, but there were several in Retribution Falls that made me genuinely laugh out loud. I laugh a lot in life, but something needs to be truly funny for me to laugh at it while reading in a novel outside of a smirk. You follow the Ketty Jay’s crew through their ups and downs, sharing in their feelings of dread when something goes wrong (and trust me, things go wrong), and you feel their glee in victory.
We begin the story with a motley crew of people who aren’t entirely likable off the bat and who have a dark, hidden past and intend to keep it that way. Throughout the story, Wooding fleshes out the characters more and more until, through their hardships, they bond with eachother, sharing their past and how they ended up on the Jay. Wooding weaves the backstories so well in that while they’re difficult to connect with in the way that gets you thinking “I know exactly how he/she feels”, rather he gets you thinking “wow, that’s pretty fucked up, but I can imagine how I’d feel in his position”. Wooding takes these past experiences that most readers can’t connect via personal experience but instead connects the reader with the emotion itself.
Retribution Falls can be read as a standalone due to the fact that there’s no cliffhanger, but that will certainly not deter me from reading further into the adventures of the Ketty Jay’s crew. Rarely do I find a novel that wills me to read more of the series after such a tidy ending. Brandon Sanderson’s Mistborn: The Final Empire was an outstanding piece of work, but I felt no drive to read the Well of Ascension. Chris Wooding has me eager for more in the Black Lung Captain.