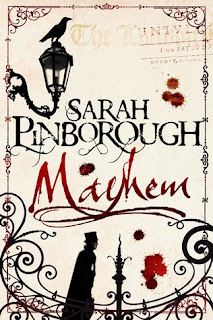 Jo Fletcher Books is publisher to many good authors, including Tom Pollock, Snorri Kristjansson, and one Sarah Pinborough. Sarah is author to many dark stories, including her Dog Faced Gods horror series, as well as rewritten fairy tales, one being Poison (Snow White) and another being Beauty (Sleeping Beauty). I’ve yet to read any of her other work, so Mayhem was a first for me in a few ways. Prior to reading it, I hadn’t really read any novels that could be categorized under mystery or crime; I’d read some with elements of each, but never something strictly one or the other.

Two things drew me to Mayhem. First, there was the cover – exceptionally elegant and very fitting of the 19th century tale that is told. Second, Jack the Ripper. If for some reason you are unaware of who he was, Jack was a serial killer in late 19th century London who targeted female prostitutes and murdered them in brutal ways. He killed at least five women, likely more, but get this – he was never caught. This anonymity led to widespread terror throughout the area for years to come. Mayhem is not a story of Jack, though, but one of a new killer, dubbed by some as The Thames Killer and as The Torso Killer by others. Though there are similarities between Jack’s killings and those of the newcomer, primarily that they both target women, the protagonist, Dr. Thomas Bond, knows that there is indeed a second killer in the London slums who keeps his victims’ heads as trophies.

Dr. Bond is a middle-aged man hired as a police surgeon to aid the police in investigating the killings of Jack, and after the limbs of a woman are recovered from the Thames river, he’s forced to help track down two killers. Bond’s life has become increasingly stressful and sleepless since he began the investigation, leading him to bouts of anxiety and an addiction to opium. Opium is his escape – when he can’t sleep he heads to the dens to smoke some poppy and close his eyes, though he usually ends up having terrifying dreams brought on by the drug and his contact with the victims.  Throughout Mayhem we see Bond fall into deeper and darker places, and his characterization and development are fantastic.

Alongside Dr. Bond, there are two characters who get a smaller amount of face-time – Inspector Henry Moore and a Polish refugee and hairdresser known as Aaron Kosminski. This is where Mayhem partially fell short for me. Dr. Bond’s chapters are told in the first person, which is perfect for the premise of the story, and what I expected the entire story to be, whereas Inspector Moore and Aaron Kosminski’s chapters are told in the third person. Although the insight from different characters was interesting – especially seeing their thoughts on Bond’s drastic changes throughout the story – I felt that it disrupted the flow of the story and a little distracting. Maybe it was because I hadn’t read a story that switched from first to third person throughout the tale before, but I think it could have been beneficial to commit to one or the other. Due to the nature of the story, though, it would not have been complete and the reader would be left wondering what was happening if Kosminski wasn’t a point-of-view character.

Much of what you’ll get out of Mayhem is dependent upon your expectations going in. Due to this being my first real crime novel, I had expected a fast-paced story where the investigation was always one step behind the killer until some sort of culmination at the end, and the initial chapter convinced me that’s what I was getting. The first chapter was a dark and gripping recount of the Torso Killer’s first murder. But after that, the pacing proceeded at an average pace, picking up at points where a new lead or a new victim is found. Despite this, Pinborough’s elegant prose, as with the cover, perfectly fit the time of the story and created a sort of fog and feeling of claustrophobia around the darker areas of London. Now and then the story jumped ahead days, weeks, and even months and thus the reader can be left either okay with nothing happening in those intervals or wondering if the time frame could have been condensed to improve the pacing, though that may have thrown off the backdrop of Jack’s murders, so take from that what you will.

Another strong aspect of Mayhem is Pinborough’s use of news articles and police reports between occasional chapters. When there’s a new victim, we’re given a chance to read what the citizens of 1887-1889 London read and feel what they felt. Pinborough also shows her skill in writing in revealing the killer around halfway through the story and avoiding the cliché of his immediate capture, but without harming the pacing in any way.

Sarah Pinborough’s Mayhem is a dark, elegantly written tale with some particularly gripping scenes and a well executed supernatural aspect that led to a solid, if not slightly rushed ending. There is a definite air of mystery throughout the story and even though it was not the story I expected, it was still an entertaining read and I am looking forward to the ‘further adventures of Dr. Bond’ in May 2015, when Sarah will be releasing Murder.

One thought on “Review – Mayhem by Sarah Pinborough”

“It does not do to dwell on dreams and forget to live.”