Review – A Wizard of Earthsea by Ursula K. Le Guin 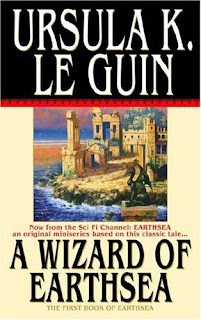 Forty-five years ago, Ursula K. Le Guin laid the foundation for what is now the modern wizard in fantasy in A Wizard of Earthsea. It is a coming-of-age tale of Ged, a ‘chosen’ young man from the island of Gont, with wizards, dragons, and demons plentiful. What’s that you say? A young man with dreams of becoming a wizard? Dragons? Demons? It sounds generic? That’s the thing, it is generic by today’s standards, but it was one of the first to do what it did, and reading it for the first time almost half a century after publication, I found it to be a somewhat refreshing read and it allowed me insight into the foundations of today’s wizard.

Unlike in much of modern fantasy where there’s a special order of mages or wizards that only number a fraction of the overall population, Earthsea, and the area around Gont in particular, has a great population of magic-users. Wizards are commonplace, and it seemed that even the small villages had their local spell-slinger. Ged is hungry for power and knowledge from a young age, and most of the story is him being a fairly greedy kid in his hunt for power. Ged is sent to the school of wizardry at the island of Roke, where he meets some new friends as well as enemies.

As soon as you enter the gate of Roke, you are an apprentice and begin your studying to become a sorcerer and eventually, when you earn your staff, a wizard. As is seen in Harry Potter and the Kingkiller Chronicles, Roke’s school features master wizards as teachers in a variety of classes. The magic in Earthsea comes from the use of names. Names hold complete and utter power over everything, and even the lowest farmhand keeps his true name hidden to the world, and instead goes by his use-name, and Ged’s use-name is Sparrowhawk. Magic in the story is near-limitless – from transformation to illusions to controlling the weather, so it is very apparent why Ged wants it all. All the teachers prattle about balance and equilibrium, to be wary of the consequences of the magic you use, but Ged will have none of it.

In Ged’s arrogance, he does a terrible thing and is haunted by it. Therein lies the tale – one of the hunter and the hunted. Modern fantasy’s main facets lie in world-building and characterization. It is commonplace to read about how juicy the grapes at dinner are or what fabric was used to thread the drapes on the wall in anything published in the last decade or so. A Wizard of Earthsea brought me back to the roots of fantasy. There is no world-building, and the characters are all fairly cookie-cutter, including Ged for the most part. Le Guin is similar to the late, great David Gemmell in her writing. They both tell it how it is, without the all the fluff in between.

Earthsea isn’t a long, drawn out tale of every little happening in the world, it’s one of adventure. Many ask why, in Lord of the Rings, Frodo didn’t just ride the Eagles to Mount Doom and end the story there and then. The response to that question is this: it’s not about just getting from point A to point B, it’s about how you get there as well as the people that help you along the way. It’s about the journey. It’s about the adventure. The tale of Ged is similar – months pass by in the blink of an eye, but so many things still happen. We see Ged face his fears as we follow him from adventure to adventure, foe to foe.

The fact that Le Guin was able to encompass such a tale in under 200 pages is nothing short of amazing. It should come as no surprise that so many fantasy authors list her as an inspiration. She wrote one of the original hero’s tales, and reading it forty-five years after publication, it has stood the test of time.

Find A Wizard of Earthsea on:

3 thoughts on “Review – A Wizard of Earthsea by Ursula K. Le Guin”