I’ve been pretty slow on reading recently and I can’t really say why, as I don’t know myself. At any rate, I’ve got a haul of recent books and ARCS that look promising. 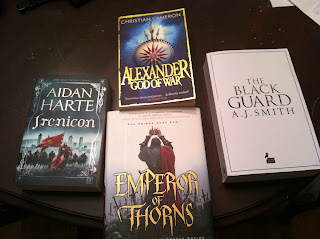 Aidan Harte’s Irenicon was one that I won in a contest from the awesome people over at Jo Fletcher, and the book has been on my TBR for quite some time. The blurb talks about engineers and the cover is of a medieval setting, so maybe it will have the combination of science and swords that Malazan has.

God of War was one I ordered myself because I’m a huge fan of Christian Cameron and his historical fiction. This details the life of Alexander the Great through the eyes of Ptolemy – I’ve read about 100 pages at random points and it’s very good.

The Black Guard, A.J. Smith’s debut, was sent to me by Head of Zeus and it looks to add to the list of strong 2013 debuts, including Jason M. Hough’s The Darwin Elevator and Django Wexler’s The Thousand Names.

I’d sent my name and blog to Mark Lawrence a while back when he said that his publisher was looking for US bloggers for reviews. I’d nearly forgotten that I’d done so until I heard a thump at my door a few days ago – a shiny copy of Emperor of Thorns. I’d read Prince of Thorns last year and thoroughly enjoyed it and the acquisition of the final book in the trilogy has rocketed King of Thorns up my TBR and I’m currently reading it, realizing how much I’ve missed Jorg’s cynicism.

Nathan Hawke’s The Crimson Shield should be arriving at my house any day now, and if it reads anything like the Gemmell novel it sounds like, I’ll love it. It’s an interesting decision excluding the author’s name and the title of the book from the cover, but with a cover that amazing I think it was a good call.

Another debut, Snorri Kristjansson’s Swords of Good Men looks like an exciting new viking tale. The blurb talks about the White Christ, and I’m very intrigued to read more about the potential twist on Christianity.

Last but not least, Republic of Thieves is finally here. Well, almost – it’s out October 8th. This one caused a hoopla when it appeared on NetGalley and bloggers everywhere overflowed Del Rey’s inbox with requests. I’ll need to reread Red Seas Under Red Skies prior to feasting on the gem that we all hope Republic of Thieves will be.

The rest of July and much of August look to be very busy for spec-fic readers, with several promising new releases cascading in.

“So many books, so little time.”