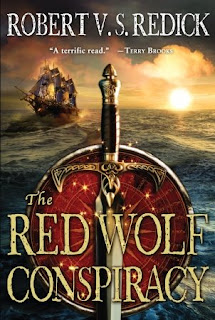 “Six hundred years old, the Imperial Merchant Ship Chathrand is a massive floating outpost of the Empire of Arqual. And it is on its most vital mission yet: to deliver a young woman whose marriage will seal the peace between Arqual and its mortal enemy, the Mzithrin Empire. But Thasha, the young noblewoman in question, may be bringing her swords to the altar.
For the ship’s true mission is not peace but war – a war that threatens to rekindle an ancient power long lost. As the Chathrand navigates treacherous waters, Thasha must seek unlikely allies – including a magic-cursed deckhand, a stowaway tribe of foot-high warriors, and a singularly heroic rat-and enter a treacherous web of intrigue to uncover the secret of the legendary Red Wolf.”
The Red Wolf Conspiracy is Robert V.S. Redick’s fantasy debut and the first novel in the Chathrand Voyages quartet. Redick’s true debut, Conquistadors, though unpublished, was a finalist for the 2002 AWP/Thomas Dunne Novel Award. The word conspiracy in the title is the key. The book is filled to the brim with intrigue, every single character having his or her own ambitions, giving it so many twists, even the twists have twists.
The blurb makes it seem as though Thasha Isiq is the main character of The Red Wolf Conspiracy. On the contrary, I found that the “magic-cursed deckhand”, Pazel Pathkendle, had the most facetime, with Thasha close behind. Redick gives us a wide variety of characters and points of view, but these two receive the most attention. The biggest draw of the characters was their varying and lovable personalities.
Pazel Pathkendle has a gift, or a curse, as he sees it. He can immediately learn a language when he hears or reads it. Sounds pretty cool, right? The problem is, he occasionally gets these mind-fits where he gets a pulsing in the back of his head and begins to scream gibberish, shortly after which he blacks out for several hours. How Pazel’s gift came to be is revealed fairly early in the novel. A competent tarboy, or a servant boy working a ship with pitch-stained hands, Pazel bounced from ship to ship for various reasons after his homeland of Ormael was invaded by Arqual, which is explained in his very well-developed backstory before landing on the Chathrand.
Thasha Isiq, the ambassador’s daughter, is promised to a marriage against her will in order to confirm a sort of lasting peace between Arqual and the Mzithrin Empire. Naturally, she won’t be going down without a fight.
Alongside the two main characters, we see through the eyes of the mildly insane Captain Nilus Rose, a deadly spymaster, and two fantastic additions that really added an extra something to the story:
The ixchel are the foot-high humanoid warriors who are loathed by the humans, whom the ixchel refer to as giants. They’ve brought their entire clan onto the Chathrand for this mission, so we know it’s huge.
Next we have ‘woken’ animals. Animals that have been woken are able to speak and think as humans do. For example, non-woken rats can talk in immediate conversation, but they essentially forget about it as soon as the conversation ends. From rats to birds to cats, Redick has given us a truly awesome world to immerse ourselves in.
Speaking of the world, it begins with the Chathrand. The Chathrand is basically, as Pazel aptly describes it, a floating city. Immense in size, the vessel fits hundreds of sailors and passengers, and much of The Red Wolf Conspiracy takes place aboard it. In the land encounters, we have a fairly traditional fantasy setting, but it is described thoroughly well, with interesting encounters with races such as the frog-like Flikkermen and the sirens known as the Murth. Redick also showed some expertise in his consistent use of nautical terms. I’m no expert, but if you’re going to have a novel where most of the action takes place on a ship, mentions of the mizzen and the various decks and such are a must.
Redick’s use of several different narrative styles in The Red Wolf Conspiracy makes the tale one of the most unique in narration that I’ve encountered. Alongside the traditional narrative in third-person omniscient, he supplements the story with things like journal entries (with editor’s notes!), letters, and occasionally parenthetical quips or pieces of extra information after a sentence. The little things like dates for each chapter and an appendix at the end that includes a description of the calendar as well as a timeline of the history of the world of Alifros really made me appreciate how much effort Redick put into this novel.
In the end, The Red Wolf Conspiracy was a fantastic read filled with adventure, suspense, conspiracy, and great characters. If I was forced to pick a flaw, it would have been the names. Several of them seem like a bunch of letters were tossed into a cocktail shaker and dumped onto a counter to form the names of people or cities. Outside of that minor flaw, The Red Wolf Conspiracy was one of my favorite reads of the year, especially the last 100 or so pages of heart-pounding action/suspense, and I look forward to The Rats and the Ruling Sea.
Find The Red Wolf Conspiracy and Robert V.S. Redick’s other work at Goodreads, where you can then pick your favorite online retailer if you’re interested in purchasing it.